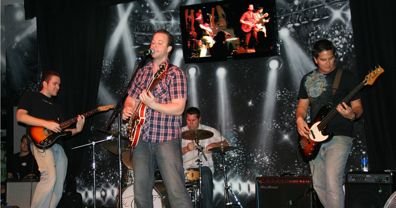 RIYL: Saves the Day, Get Up Kids, Dashboard Confessional

The four-piece rockabilly band Causing Problems was founded in 2000 by singer/guitarists Andy Killion and Branden Gerbracht. “We both picked up guitar after our old ska band broke up,” says Killion, who also plays clarinet and sax. “Remember ska? Yeah, we were there when it died a third death.” The band was rounded out by Robert Thomas (bass), and Scott Brown (drums). Thomas was replaced in 2006 by Richard LeGerrette.

“We started by strumming along with Saves the Day, Get Up Kids, and Dashboard Confessional songs,” says Killion. “Yeah, pretty much any band on Vagrant Records back in their heyday. I taught clarinet and sax at Alan’s Music in La Mesa at the time, which is how I got in touch with Scott, who taught there as well. Then, we progressed to playing horrible covers of songs as a band, which led us to produce some originals. Ricky came around much later.”

Killion is reluctant to describe the band as the “rockabilly.” “We’ve been all over the board, for lack of a cohesive ‘sound.’ We play a lot of rockabilly, psychobilly, and big, angry, occasionally fast riff rock. As for the best description of the band’s music...I’ve always liked the term cowpunk.”

After recording two independent EPs (Trying New Things and Something Beautiful to Hold), their full-length album Huckleberry was released in 2004.