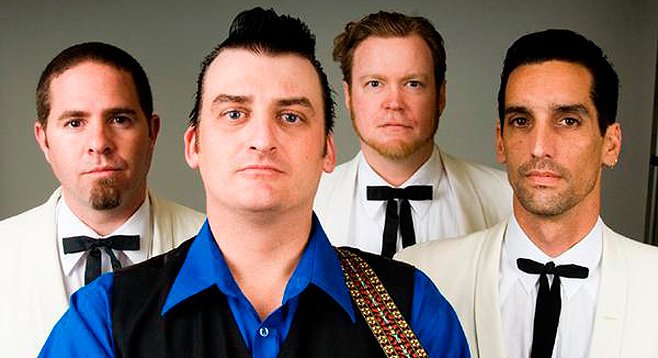 Cash’d Out is a Johnny Cash cover band that formed in late 2004 when singer Douglas Benson (who had only recently learned guitar) met guitarist Kevin Manuel through an ad in the Reader. Manuel recruited bass player Sean Gilthero. Their debut performance was in January 2005.

The band strives to recreate music from Cash’s Columbia and Sun Records period, along with the famed live recordings Cash did at Folsom Prison and San Quentin.

The success of the biopic film Walk the Line hasn’t hurt the group’s popularity. “No one else in music has accomplished as much as Johnny Cash,” says Benson. “Even through all his success, he maintained outstanding integrity and humbleness. I noticed by radio and by talking to people that only the diehard Cash fan really knew Johnny’s true style and sound. It is my goal to bring Johnny's more obscure songs to people.”

“This whole thing started long before Walk the Line became the buzz,” according to former drummer Charles Henning. “This started as a result of a true love and appreciation for the music of Johnny Cash. We agreed that this venture would start as and remain a tribute to a music icon.”

Manuel says, “I never really ever saw myself playing in a cover band, but I’ve always loved Johnny Cash, and I’ve always thought that it was a shame that people in general only know a handful of his songs. It’s just a way to honor Cash, a real genius of a performer and songwriter. And Luther Perkins, as well, a great pioneer in guitar playing. He was such an integral part of the whole sound behind Johnny.”

Drummer George Bernardo joined in 2007. In August of that year, the band won $20,000 in Viejas’s Ultimate Cover Band contest. Detroit Underground came in second ($8K), while Crush came in third ($4K). Bill Miller, Johnny Cash’s best friend, asked the band to perform at the opening of the Johnny Cash exhibit at the Fender Museum in Corona, California, where they jammed with longtime Cash drummer W.S. Holland. The band returned to the Fender Museum in 2008 to play a Cash birthday celebration with John Carter Cash [Johnny Cash’s son] and Cindy Cash [Cash’s daughter].

They won Best Cover Or Tribute Band at the 2008 San Diego Music Awards, and Best Tribute Band at the 2011 and 2012 editions. As of 2012, the group lineup was Douglas Benson on vocals, Kevin Manuel pickin’ a telecaster like Luther Perkins, Ryan Thomas keeping the rhythm with his doghouse bass, and George Bernardo on the drum kit.

They took home the trophy for Best Cover or Tribute Band at the October 2013 San Diego Music Awards, which named them Best Cover Band in October 2014.