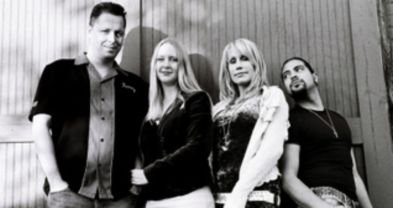 Singer, songwriter, and guitarist Carolann Ames was born in Wyoming and grew up in Austin, Texas.

“I guess I’d describe my music as Americana music,” she says, “with a lot of varied influences. Pretty much whatever I decide to write, that’s what goes in there. You know, old fashioned singer-songwriter storytelling, down-home music. It”s about songs being real.” Ames often performs benefits for local social action groups like Photocharity, which raises money for a homeless teen shelter in San Diego called the Storefront (in operation since 1970).

“Over the past three years, the Storefront has raised over $400,000, enabling them to maintain a 20-bed, 24 hour emergency shelter for homeless and runaway youths age 12 to 17, including a medical clinic and on-site tutoring,” says Ames. “Their goal is to return these young people to their families or to find them safe, independent living arrangements and prevent their sexual or other physical abuse. They have a 75 percent success rate for placing teens in safe, long term housing options. In order to stay in the shelter, the teens must help themselves by agreeing to go back to school or get a job...they don’t just hand the kids a toothbrush.”

Ames' CD So Long Abilene debuted in February 2008 on MySpace. Bandmate Hector Maldonado appears on the Today Show August 6, 2010, with his band.