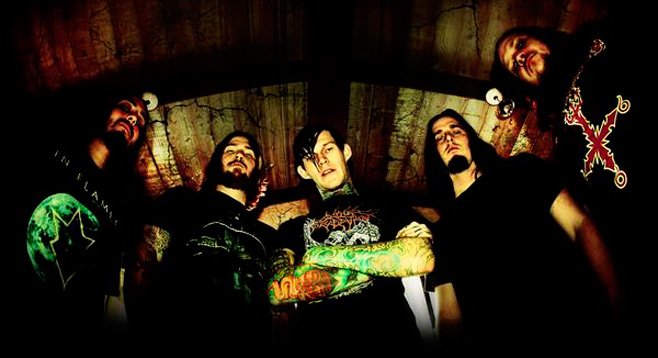 RIYL: Pathology, As I Lay Dying, All Shall Perish, Desmiado, Cattle Decapitation

Influences: As I Lay Dying, BombFactory, them, All Shall Perish, Suicide Silence, Whitechapel, Slipknot

"Cannibal Corpse is part of the old regime. The whole satanic image with corpse paint and long hair and gauntlets like Slayer is not what you need anymore. Old death metal all sounds the same. We want to have a fun, sing-along version of grind-core...death metal that can groove."

"Once Fallbrook kids get ahold of a band, they become serious, loyal fans," says Lewis. "We have a tight-knit support group of 60 to 100 kids that will show up to every one of our shows. They will drive all the way to Soma or up to Fullerton.... We go against the direction of everything, especially in California. Everything's getting more liberal. People are losing their gender definition. Tree-hugging liberal Birkenstock-wearing hippie parents are letting their [male] kids go out to shows dressed up like girls."

Although Lewis says Carnifex is not a political band, they wrote and perform "Blood for Tyrants," a song in support of the war effort.

"Because people have a dislike of one person [George Bush], it seems that it was a pretty poor attitude to discredit our military and their families," says Lewis.

Carnifex has self-booked their own tours. What about playing in San Diego?

"We don't have a problem with Soma," says Lewis, "but it seems like bands with no talent get to play [Soma's] main stage. It's all about who you know. It makes it difficult for bands that are actually going out and getting their own shows."

At the end of 2008, the embarked on a European tour opening for Despised Icon - their December 1 set at Moscow's Tochka Club was the band’s first time in Russia.

“You can’t just request a visa; they have to invite you into the country. We had to overnight them our passports and fill out a government form that asked us things like, ‘Have you ever worked around plutonium?’ and ‘Do you have any special weapons training?’”

Their 2010 album Hell Chose Me sold around 3,100 copies in the United States in its first week of release. The CD landed at number four on the Top New Artist Albums (Heatseekers) chart, which lists the best-selling albums by new and developing artists, defined as those who have never appeared in the Top 100 of The Billboard 200.

Their next full-length Until I Feel Nothing was released in October 2011 via Victory Records. Produced by Tim Lambesis (As I Lay Dying), the cover artwork was created by famed comic book illustrator Menton3 (Silent Hill, Monocyte).

Then, “As of now, Carnifex is in a state of suspended animation,” said singer Scott Lewis in Autumn 2012. “The reasons for this are many and complicated...Carnifex is now retreating into the obscurity we once came from.” However, in summer 2013, the band announced a European Never Say Die tour, and they began recording a new album as well.

Their seventh studio album, World War X, was released in August 2019 via Nuclear Blast. The first single, “No Light Shall Save Us,” features Alissa White-Gluz (Arch Enemy), with a music video directed by Scott Hansen (Deicide, Prong). Produced by the band with Jason Suecof (Death Angel, Chelsea Grin), the album was recorded and mixed by at AudioHammer Studio in Sanford, Florida, with vocals tracked by Mick Kenney (Bleeding Through) at the Barracks Studio in Huntington Beach. The album artwork was created by Blake Armstrong. They supported the album as a headliner on the Summer Slaughter tour with the Faceless, Rivers of Nihil, Nekrogoblikon, and Brand of Sacrifice.

In their next lineup change, lead guitarist Jordan Lockrey (who joined in 2013) was out, and Devildriver's Neal Tiemann took his place on the 3TEETH tour.