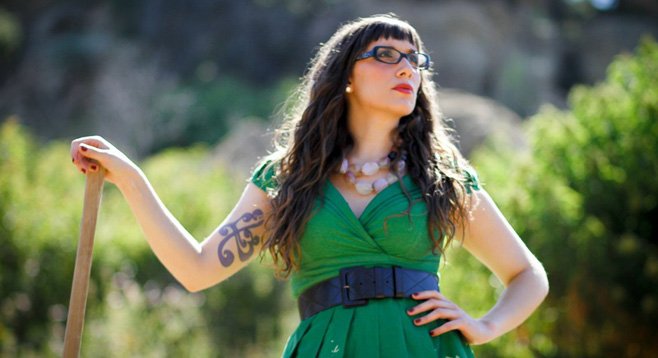 “I’m a first-generation American on my father’s side,” says North Park singer/songwriter Carmen Caserta. “He’s a native Italian, and the only member of his family to ever leave Italy. Such courage!”

Caserta was 19 when she dragged her piano from L.A. to San Diego, originally to attend college. “I got my undergraduate degree in psychology and then started law school in 2008,” she says, “but I was playing and singing in secret at home, every day, for around seven years.”

With a notebook full of songs and encouragement from locals such as performer/producer Astra Kelly, Caserta recorded a four-song EP called Years in late 2010. “The songs are pieces of my soul, feelings in my heart: vulnerable, gut-level, and sometimes uncomfortably exposed revelations.”

Caserta’s debut full-length The Hive, recorded at Capricorn Studios in S.D. with producer Astra Kelly, was released in September 2011. “I screwed up on one of the songs on my album, but I didn’t realize it until after it was mastered, so the song doesn’t begin the way I intended it to. [Growls.] How will I ever get over that one?”

Now playing live shows around town, she cites her favorite concert as one performed by the aforementioned Tori Amos.

“The first time I saw her was at the Greek Theatre in L.A. when I was 13, and I remember moments when her expression was so unbridled and intense that I actually felt uncomfortable, because she was triggering such painful places for me. She has the power to evoke an enormous range of emotion, from pain, anger, grief, and the horrifying feeling of being sexually violated, to courage, strength, and empowerment. She uses her entire being as the catalyst for this experience.”