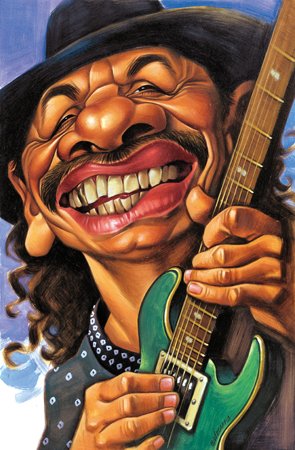 Born in the Mexican state of Jalisco (Autlan de Navarro), guitarist Carlos Alberto Santana Barragán -- aka Carlos Santana -- came from a musical family. His father was a mariachi violinist, and Santana learned to play the violin at age five and the guitar at age eight. His younger brother, Jorge Santana, would also become a professional guitarist.

Santana played many of his earliest gigs while still a teenager hustling through the nighclubs of Tijuana. Famed TJ guitarist Javier Bátiz served as one of his most influential guitar teachers, inspiring him to develop a different style of guitar soloing than was common in the sixties.

After his family moved to San Francisco, he formed his namesake band, going on to play Woodstock and become one of the most enduring groups of the sixties rock era. In 2003, Rolling Stone magazine listed Santana at number 15 on their list of the 100 Greatest Guitarists of All Time.

As of 2011, Santana also co-owns the Mission Valley Mexican restaurant Maria Maria, part of a small chain of eateries, in partnership with a larger restaurant company which also owns Bing Crosby in Fashion Valley. The menus are designed by chef-consultant Roberto Santibañez, with the San Diego branch’s kitchen overseen by executive chef Brian Moran. The restaurant’s first locations were in Walnut Creek and Danville, both far-eastern suburbs of San Francisco. Then came Tempe, Arizona, and Austin, Texas, and the San Diego branch in Hazard Center, on the site of the former Prego.