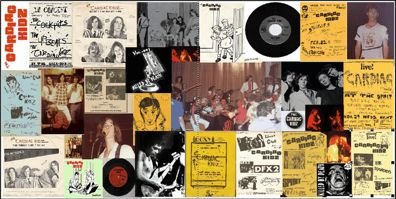 RIYL: The Zeros, the Sex Pistols, the Ramones, Fear, Black Flag, the Dead Kennedys, Flipper, DFX2, the Dinettes, the Hitmakers, the Standbys

Influences: The Beatles, Gang of Four, Pink Floyd, the Ramones, the Clash, the Jam, David Bowie, Yes, R.E.M., the Pretenders, the Rolling Stones

The Cardiac Kidz were a 1970s San Diego punk band that evolved from the group Glass Onion in 1976. Their vinyl records now fetch big money among garage and punk rock collectors. One of their earliest TV appearances was on the San Diego morning show Sun Up San Diego with host Jerry Bishop.

After making their local live debut at the Spirit on November 29, 1978, they played clubs and concert venues around town like the Skeleton Club, SDSU's Back Door, the North Park Lions' Club, and the Roxy Theater in PB.

Though only extant for a few years in the late ’70s, Jim Ryan says they were playing every week. “Our first concert at the Backdoor was probably our best gig ever because of the excitement of playing for over 300 people. Up to then, we were only doing bars like the Padre Inn and Dick’s at the Beach, which brought in the traditional 30 to 75 [people]. The Backdoor gave us a chance to step up the game. We gave away our single and photo postcards all night, and it was the very first time that someone asked me to sign an autograph for them. It was like A Star Is Born.”

In 2009, Italian label Rave Up Records rereleased the Cardiac Kidz album Get Out! San Diego Punk 1978-81, a limited-edition vinyl LP. Other vintage San Diego bands with albums on the label include the Tokyos, the Products, and the Injections. While Rave Up has issued the vinyl edition, the band itself announced its intent to self-release the album on CD, with a different cover and five extra tracks.

“We’ve been rehearsing for a month, just to see what comes of it,” said Ryan in March 2010. Other original members at the time included Billy Williams (rhythm guitar) and Jerry Flack (lead guitar), with onetime bassist Joe Floy (or David Fleminger of the Answers) being added for a West Coast tour.

The band also headed back into the studio for Rave Up, to record a new single featuring “Mary Young” from the album and two new songs.

Ryan mentions some Kidz bootlegs he came across online on the Hyped by Death imprint. “It was a complete surprise to both me and Bill, [but] our interpretation of the bootlegs was as a compliment,” Ryan said. While the compilations that their songs appeared on were long out of print, the Hyped by Death label did eventually send the band copies. “They said they’d been trying to reach us,” Ryan laughed. “We really didn’t mind them including the song. After all, you don’t bootleg nobodies, right? It was a blast after all those years to be given this attention and acknowledgment.”

The Cardiac Kidz are also featured on two Killed by Death compilation albums, No. 007 and No. 12. In 2010, they released a U.S. CD version of their vinyl album, with 14 songs and unreleased bonus tracks.

In summer 2010, Jim Ryan (bass/vocals), Jerry Flack(guitar/vocals), and Jerry Nelson (drums) were joined by former Wallflowers frontman David Rinck on second guitar. By the end of the year, they had released two records: Meet With Me: Live at Lestats West and Rarities 1979 to 1981: Get Out on local Blindspot Records, after which Rinck moved on to other projects.

The February 2011 issue of UK’s legendary Record Collector mag included an article about the Kids’ Rarities 1979 to 1981: Get Out, on local Blindspot Records.

“The reunion will continue,” said Ryan in April 2011. “We’re making lots of plans. We’ll hit New York and team up with [NY band] the Last Internationale in June, and then we have a European tour. My friends in Ireland said that they’ll help us plan out a Belfast Dash, too.”

As a member of one of San Diego’s two oldest recently reunited punk bands (the other being the Zeros), what does Ryan think of the city’s current musical crop? “I like Mike Stax’s group the Loons, and the Last Years are really good, too. They’re kids who call their music ‘the sound of ’77.’ We were ’77, so they’re like our grandkids.”

A new EP, Playing for Change, was announced by the reunited punks in early 2011. However, before its release, bassist David Flemminger, drummer Matt Johnson, and guitarist David Rinck left the band.

“Jerry [Flack] and I have decided that we’re the official Glimmer Twins of the punk-rock world,” Jim Ryan told the Reader. “We will continue to play and record with other local musicians...until we come across like-minded members to be incorporated into the band.

“The group seems to move through members a lot,” says Ryan. “The guys mistake my openness to their input as a full-on tossing the reins of control over to them. When they find out that I have rules of engagement that include a certain sound and attitude that I expect them to uphold, there’s a short falling out and the Kidz are on the prowl again for new members. The bad thing is that we never seem to hold on to anyone long enough to solidify the sound. The good thing is that the DNA of the group is spread deeply into the San Diego music scene, as our members have crossed over into at least ten different local bands.”

They debuted new songs at Brick by Brick on September 8, 2011, with new drummer John Webster, who remained with the band through the remaining 2011 In & Out tour and recording sessions. Several reunion performances were staged over the next few years, including a July 2018 set at Til-Two.

2019 saw the release of their 40 Years of Punk CD, followed the next year by a new album on local Blindspot Records called Empty Chairs that spotlights the power pop punk side of the group, featuring two new songs and a track previously only found on a compilation, with all original recordings dating from 1976 - 2018.

Ryan also has a side band called the Jim Ryan Project.