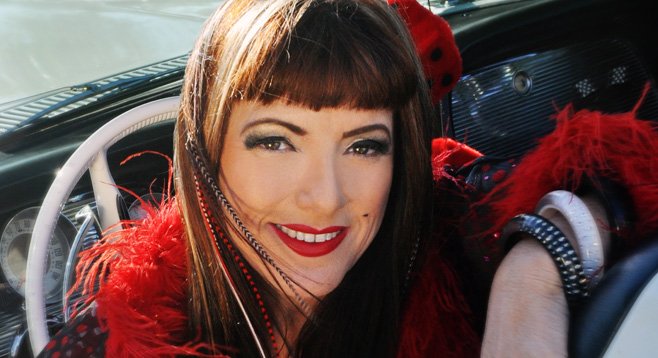 She moved to Oceanside around 1991. A musical based on Kane's early life story, The Toughest Girl in the World, debuted in workshops at the Diversionary Theatre in January 2009.

Around the same time, she battled -- and beat -- pancreatic cancer.

In 2010, she completed her autobiographical stage play The Toughest Girl Alive. It debuted January 15, 2011 at the Moxie Theater, running through February 6.

In summer 2011, she released her 11th album, Sister Vagabond, on Delta Groove Records. The album was produced by Kane and her guitarist Laura Chavez -- the same duo did her previous album in 2010, Superhero. Her Toughest Girl Alive autobiographical stage musical opened in New York City on August 14.

The Blues Foundation 33rd Blues Music Award Nominees included Kane, up for the BB King Entertainer of the year award, as well as best Contemporary Blues Female Artist. Around the same time, her album Sister Vagabond was nominated for a German Blues Award.

Her 2013 CD Coming Out Swingin', engineered and co-produced by Thomas Yearsley and Laura Chavez, features thirteen songs Kane wrote or co-wrote with Chavez, plus a few well chosen covers.

"I am really proud of my work on this CD, the first one since my Whipple revision surgery at Cedars Sinai in May of 2012," she says. "It was recorded live to analog in Oceanside at my ex husband Thomas Yearsley’s Thunderbird Studio. It was fun recording and working with Tom again. He did a great job engineering the CD with Laura. She learned so much, I am pretty sure she wants to be an engineer herself now!" The album was released in France on Dixie Frog records on June 18, 2013, and then distributed with the help of Vizztone Records in the USA.

In early 2016, it was reported that Kane was hospitalized in Oceanside on January 4, to await transfer to Cedars Sinai in Los Angeles. She passed away on May 6, 2016.