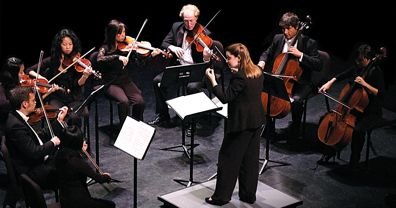 The California Chamber Orchestra is the resident ensemble of the Golden Valley Music Society. The orchestra presents a series of concerts each season at the Old Town Temecula Community Theater, in
partnership with Temecula Presents. In addition, the orchestra occasionally performs at other venues.

Cofounder Warren Gref is a former French horn player for the San Diego Symphony. In the early 1970s, he worked with the San Antonio Symphony in Texas. He then taught at the University of Georgia and then the University of New Mexico before moving to San Diego to join the Symphony in 1979. In summer 2003, Gref took part in the fellowship program of the American Academy of Conducting in Aspen, Colorado. He became conductor for the California Chamber Orchestra in 2005.

As of 2011, the Artistic Director and Conductor for the California Chamber Orchestra is Dana Mambourg Zimbric. A new weekly series of chamber recitals, Classics at the Merc was launched every Sunday at 3:00 p.m. in the Club at the Merc, at the Old Town Temecula Community Theater.