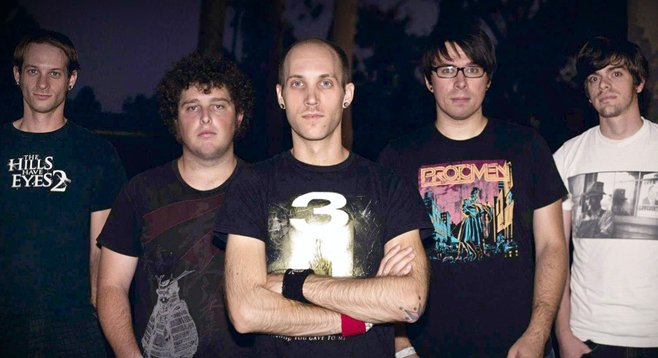 RIYL: Coheed & Cambria, the Used, Thrice, Glassjaw, Moneen, At the Drive In, Further Seems Forever, 3, the Get up Kids, Lorene Drive, Anadivine, AFI

Based in Rancho San Diego and Clairemont, the Calefaction is the brainchild of multi-instrumentalist Nick "Nova" Savino, originally formed in Colorado until Savino moved back to his hometown San Diego in 2007.

By 2012, the band had played several local venues, though not gigs go swimmingly. “We played at the Griffin, and only the bartender, sound guy, and my girlfriend were there,” says Nova. “The worst part is how amazing we sounded that night. Also, we were invited to play at Brick By Brick by some cool L.A. bands, and none of the bands showed up, so we played for the six friends who made it out.”

The band has “an overall theme,” according to Nova. “It's not like a costume showy thing, though. In 2002, I started working on this concept album called Half Mass Flag: A Pirate's Tale. It was a whole other world with pirates, zombies, and witches. In the story, I wrote myself in as the evil captain of a ship called SS Seahorse. I was and still am hoping to turn it into a movie someday, because I really love the story. Lyrically, I write through stories I've created, but it always feels like my subconscious is writing a real story at the same time, with day to day struggles and trying to survive, to fulfill the goals I've set for myself.”

They released their full-length Whales of Pearl Peak Part 1 in 2012, followed by Whales Part 2 : Tomorrowland in January 2013.

“Part 1 carried a pirate theme, and in Part 2 we've taken our pirate ship to the skies, becoming skyrates of a new world, embracing steampunk. Yes, we're a bunch of nerds.”