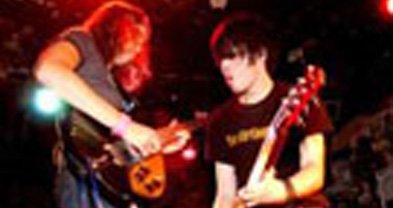 "We don't have a bass player, but for some reason when people see us for the first time, they think Davida [Milkes] plays bass," says Buzzkill Romantics' singer/guitarist Jason Hee. "I don't know why anyone should be surprised to see a three-piece with a female lead guitarist...Try saying to her, 'You play pretty good for a girl' and see what happens."

The bluesy hard rockers came together in the summer of 2003. Hee was fronting the more pop-oriented Rookie Card, and Milkes was in R&B group SDBO (San Diego Beat Organization). She brought in SDBO alum Charlie Brownell (founding drummer for the Nephews), and by July 2004 they'd made it to the legendary punk club CBGB in New York. "It was a long way from playing Nikki Sixx in a Mötley Crüe cover band," says Hee.

When asked to describe their music, Hee says, "Someone compared us to Urge Overkill...[that] the Nash Kato influence is unmistakable. I have no idea what that's supposed to mean." Regarding their name, he explains "In my last band, I started to gain a reputation for anti-enthusiasm, eventually acquiring the nickname Shruggs Buzzkill. But that's pretty bland on its own, eh? Everything I write is about the downside of love, the exultation of passion, and the conflict between reason and emotion. Hence, Romantics, [although] more Edgar Allan Poe than Valentine's Day."

The band released their debut album Cold Cold Cold in January 2005; it was nominated for Best Rock Album at the 2005 San Diego Music Awards. The track "Pretty Girls Need Friends" also made a strong showing on local radio and was included in that year's Loudspeaker compilation issued by 91X-FM.

The group's last release Aftermath of Love was mostly recorded in in 2006, though not released until late 2007. They split in 2008, with their final show taking place January 28 at the Casbah. In 2008, guitarist Davida Milkes served as a guitar tech and backing musician on tours with Gene Loves Jezebel and ex–Catherine Wheel front man Rob Dickinson, occasionally joining Dickinson onstage for several songs.

Milkes also toured North America in the Electric Mood Maidens, her group that includes Marty Willson-Piper of ’80s hit-makers the Church. “I’ve been friends with them for years, particularly Marty,” explains Milkes of her connection to the Australian rockers, for whom she has long roadied.

Jason Hee has also played bass with Billy Midnight, who released a new CD Don't Get Your Hopes Up in 2007. Hee has also produced recordings by Static Halo.