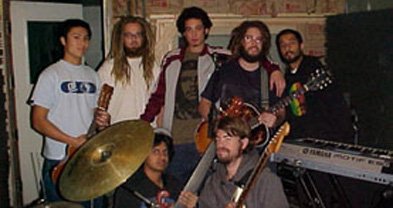 Sound description: Ska legend Chris Murray had this to say about Burnt: "It sounds like what would have happened if Bob Marley would have hung out with Frank Zappa."

Influences: Toots and the Maytals, Bob Marley and the Wailers, Burning Spear, the Mighty Black Diamonds

Burnt is a seven-piece reggae/punk/hip-hop group that has a bass-heavy reggae sound that mixes smooth vocals, an emcee, horns-deep drum beats, and percussion. In addition to creating the best parties revered around the San Diego area, Burnt also rallies around social-political-environmental causes in their community. All of these elements have combined to give Burnt a loyal following in the Cali reggae/ska/punk scene.

"The space was a bona fide shithole. We took it over and replaced the rotten drywall and knocked out the walls that had termites.... There are at least three and as many as six musicians who live here at any given time. We have a tent in the back.... We made the front part into an art gallery to showcase local art." The first art show at the venue was held on March 24, 2006.

"We started drinking early. I fell asleep and passed out. My drummer shook me to wake me up to tell me that a friend of ours had been hit by a car. I go out and see another of our roommates in the back seat of the cop car. I was still drunk and in an emotional state. I opened the door to talk to him, and he told me he was the first one on the scene, and the cops thought he maybe did it. It was a hit-and-run.

"Next thing I know, I was slammed on top of [a] truck. They pulled my hands back, cuffed me, ripped my shirt, then they pushed my head into the asphalt. They were yelling at me, 'You idiot. What do you think you're doing in the back of a cop car?' My roommate in the car had dreads, too, so one of [the officers] said, 'It looks like we have a whole tribe of these guys around here.' The 'tribe' [mention] is what set me off. It showed lack of respect for someone who cared about someone else in an accident. I lost control. I probably used a few expletives."

Franco went to jail at 4 a.m. that Saturday.

"I never talked to an attorney. The maximum they can hold you for is 72 hours, but because it was a weekend, they kept me five days. They released me Wednesday with no formal charges. As soon as I got out I played Brick by Brick. I went from wearing county blues to singing on stage about how to purge the system of wickedness.

"Everyone in jail was coming off meth. I saw guys my age [26] with their hair falling out. They don't help these guys detox. [People using drugs] don't have access to counselors. The toilet paper is at a premium. It's only given to certain individuals.... The whole place smelled like piss. They aren't fed nutritional food. They gave out half pints of juice that say on the side that this product contains no juice. These guys aren't arch-criminals. How do they expect these young guys to do better if they mistreat them like that?"