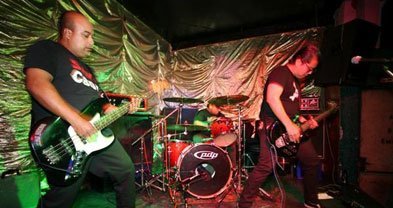 Bumbklaatt formed in 2001, featuring former members of Chicken Farm, Discordia, Kracneo, the Rabbits, and Run for Your Fucking Life. Two of the members have lived in Chula Vista and two in Tijuana. To play punk rock in TJ, they rented an empty building to put on shows.

But there were problems. “We came down to find someone broke in and stole all our equipment,” says Bumbklaatt guitarist Ubaldo Salvador. “They took, like, $900 worth of P.A.… We decided from there to just let someone else own the place and we’d just come down and promote.”

They moved to a bar called Doberman’s in the Rio area where they would throw one or two shows a month. This was in 2006-’07. When that bar closed, they moved to their current venue, a pool hall called Travieso. “They let us have shows whenever we want. They keep the money from the bar, and we keep the door.” He says the tickets are usually $5.

Salvador said that bands will still come to TJ, but Yankee punkers won’t go south anymore to attend the gigs. “It used to be that at each show we’d have an equal amount of fans from the U.S. and from Mexico.” He said the SoCal fan base started drying up in the summer of ’08. Now he says almost no one comes down to see shows at Travieso. “My friends say, ‘I hear it’s pretty sketchy down there,’ or ‘I hear you need a passport.’ I don’t argue with them, but I tell them it’s not that bad and they can get by if they just have ID or a birth certificate.

“They are just not getting any tourism down there. Revolución looks like a ghost town. It just doesn’t look like a friendly place.… My other guitar player Oscar [Vargas] lives in TJ and works as a glass artist. He had to find a second job teaching.”

Salvador said his Travieso shows are a labor of love. “We usually make enough at the door to give the bands gas money. Rarely do we make anything extra.”

Salvador says Tijuana cops still tried to shake him down for a cut of the door. “They try and tell you that you have to pay them a percentage of what you make. They write up some cheap-ass receipt that doesn’t mean anything. Instead of shaking us down they should support us. It will bring more tourism down there.”