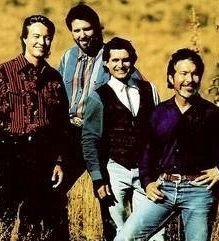 Brush Arbor was originally known as the Rice Kryspies, a 1960s folk-bluegrass group featuring the three Rice brothers (Wayne, Jim, and Joe), along with Wayne’s wife Marci on bass and Pat Stevens on drums. Influenced by the Dillards, they issued at least one single in the mid-sixties and were together for about four years, playing mostly camps, coffee houses, and churches around Southern California.

When bassist Marci left the band in 1971, they changed their name to Brush Arbor and became a Christian, country bluegrass band. After winning a local KSON radio contest, they signed to Capitol Records and issued two albums on the label, scoring minor hits in 1973 and 1974 and winning the 1974 Academy of Country Music award for Vocal Group of the Year.

After the two albums on Capitol, Wayne Rice left the group and they recorded for an array of subsequent faith-based labels (Monument Records, Word, Myrrh, Light, R&L, etc). Their final album the Way The River Runs was released in 1996.

As of 2011, Wayne Rice has had a KSON show for more than 35 years, written more than 30 books, and plays in two other San Diego bluegrass groups: Lighthouse and Grassology.