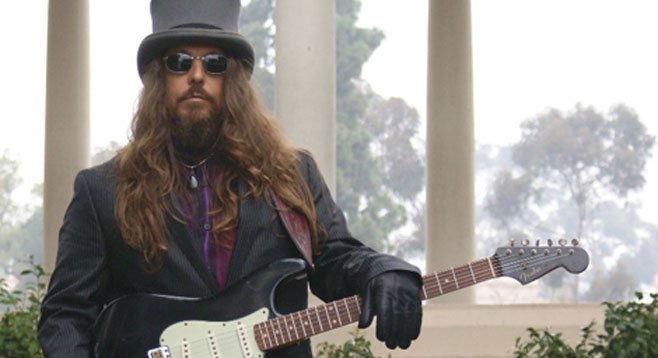 Brett Ellis is a rock-and-roll guitar player cut from the same cloth as the charismatic blues-rockers from the late 1960s and ’70s. Born in Texas, raised in San Diego, he got his first guitar at the age of 13; five years later, he says he knew he could make music his livelihood.

After graduating from the Musicians Institute, he played around San Diego in the 1980s with his band Twin Wire, performed in the band Ellis, studied classical guitar in the style of Fernando Sor, taught guitar at Albert’s Music City, and performed at the Tommy Bolin tribute festival with Glenn Hughes, formerly of Deep Purple. “I also wrote and recorded the song ‘Big Sky’ with Glenn,” he notes.

His Stealth Recording Studios in La Mesa is where he recorded Monkey Brain and a string of personal projects to follow.

“In 2003, I became obsessed with forging my own distinct voice as a guitar player. I spent countless hours developing less predictable melodic sequences and more advanced harmonic note choices. I wanted to keep what I had developed as a rock player and fuse that with bebop lines.”

During that period, he put together his first solo record, Pain. “By the time I’d finished that record I had developed what I considered my own distinct style as a player — but with plenty of room for improvement.”

“After Pain, the lyricist in me, along with the growing need to express myself vocally, could no longer be denied. So I wrote and recorded a bluesy concept record called Musical Diary of the Hopeless Romantic...to my astonishment, that record was received more favorably by my peers than Pain, so I knew it was time to develop my own style as a singer/lyricist and fuse that with my newly refined voice on guitar. I proceeded to write and record my next record, Guiltlessly Free.. That’s when I arrived at what I can say is my own style and voice as a songwriter/singer/player.”

His self-named band features Rick Nash on bass and Calvin Lakin on the drums, with whom he launched a first-rate power trio. Their album Zero was followed up in 2013 by an all-blues album entitled Blues Is Everything.