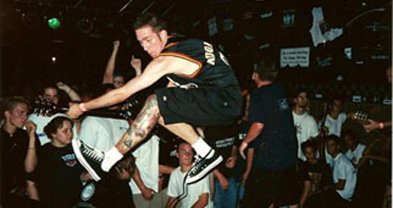 RIYL: Underoath, Bloody Sunday, Cry of the Afflicted, No Innocent Victim, Agnostic Front, the Zeros, the Penetrators, Sick of It All, Cardiac Kidz, P.O.D., Gut Punch

The Christian punk rock four-piece band Born Blind was originally from San Diego, playing shows in the western part of the U.S. All four members of the group -- Judd Morgan, Chris Beckett, Kurt Love, and Nate Jarrell -- were former members of No Innocent Victim.

“We used to record with Facedown Records here in San Diego and Solid State out of Seattle,” says guitarist Nate Jarrell. “We used to play a lot with bands like No Innocent Victim, Agnostic Front, and Sick of It All at the old Soma and the Ché.”

They released their debut album Pressing On on Facedown Records in late 1998. Their old-school punk sound continued on their second album, One for All, in mid-2000 on Solid State Records.

They only did one U.S. tour in late 2000 before calling it quits in 2001. Says Jarrell, “While I loved playing that music, I realized that I hadn’t learned anything musically since I was 15. So I started taking lessons from somebody who turned out to be a jazz guy — he exposed me to a lot of music I hadn’t heard, and through that experience I decided to go back to school [San Diego State] and get my degree.”

A reunion performance took place November 26, 2016, at Lion’s Den Tattoo in Lemon Grove. The drummer at the time was 61 years old. According to Jarrell, “We (Born Blind) got back together a few years ago and decided to play some reunion concerts which did really well. But our bassist had become a classical mandolin player who moved to Germany, so the rest of the band [singer Judd Morgan, drummer Kurt Love, bassist Mitch Johnson] reformed as Gut Punch.”