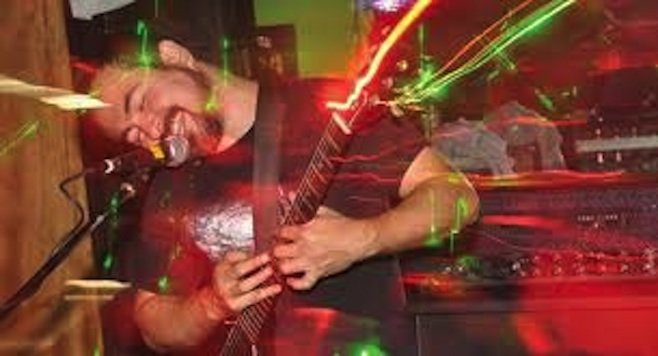 Carl Jung once posited, “The creation of something new is not accomplished by the intellect but by the play instinct acting from inner necessity. The creative mind plays with the objects it loves.”

It was in this way that Bobby Bray (the Locust, Holy Molar, Innerds), a student of Interdisciplinary Computing and the Arts at UCSD, embarked upon the invention of the Pure Data Machine in collaboration with Bryan Oczkowski (Batwings, Christwaves).

“We decided we wanted something that doesn’t exist,” Bray says. “So we rolled up our sleeves and made it ourselves.”

The customizable effects controller is based on an open-source program called Pure Data, which was authored by UCSD professor Miller Puckette. The box of knobs, switches, lights, photo cells, and a joystick runs off of a thumb drive, so data is easily exchanged and modified. One of Bray’s and Oczkowski’s mentors, professor Tom Erbe, authors and shares plug-in effects for recording software under the brand SoundHack and has created many of what Bray considers to be Pure Data’s best effects. Like Erbe, the duo plans to share all of their innovations online and for free.

Bray’s PDM is intended to function as a guitar effects controller, while Oczkowski’s is designed to work as a sound generator. The project is a response to the prevalence of mainstream effects companies who dictate what Bray calls “creative trickle down” — the musical lexicon is defined by profit motives.

“It can be argued that sound and timbre metaphorically symbolize thoughts and feelings that cannot be explained otherwise via language,” Bray says. “If you believe that to be true, then you are going to become reliant upon effects companies to define what you can communicate.”

The liberation of information and the do-it-yourself aesthetic are themes that Bray has explored through several projects, including the mapping of WiFi availability in the upscale Talmadge neighborhood, circuit-bending a Casio into an interdimensional communication device, and circuit-bending reality with mock salesman infotainment performances at bars, where he endeavors to sell free information about cymatics (wave behavior) via a homemade Chladni plate (Google it).

“This concept of proprietary information and capitalism are blocking the evolution of the collective unconscious,” says Bray, an adherent to Jungian psychology. “I want to do my part to try to unblock that in anyway I can...that involves music, science, art, and technology. That’s where I derive all my inspiration.”