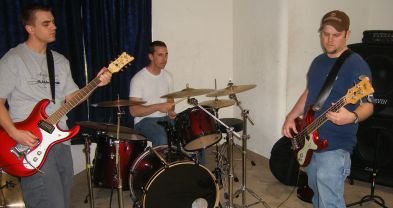 RIYL: The Aquabats, the Ventures, Dick Dale, Jonny and the Shamen, the Ubu Jeebies, Man or Astro-Man?

Influences: The Shins, the Aquabats, Jonny and the Shamen, the Ventures, Dick Dale, the Ubu Jeebies, Domo, Trisula, Jason Lee and the R.I.P.tides, the Micromanics, the Dirty Angels, Man or Astro-Man?

"The band started out as a one-off thing, to play a Halloween party with our friends in the band Three Piece Unit," says Dave Howarth, guitarist for Blue Shift. "When we started getting gigs at places like the Second Wind in Santee, we figured we might as well keep playing and see how it goes."

Howarth describes the band's music as "instrumental surf rock with a little punk mixed in. You know, 'spunk.' We're playing with a few vocal song ideas but haven't really done anything about them yet." The band includes drummer Andy Richardson ("who likes to beat on old animal skins and yell") and bassist Gary Robertson ("He taught himself to play, though I suppose that's true of almost all bassists").

Howarth offers his side of an event that was mentioned a while back in the Reader's "Crasher" column. "We were playing a house party. Halfway through our set, the crowd really started to thin out. We figured since the house was so small that you could pretty much hear us everywhere...that everyone left to get another drink or something. We didn't find out what had really happened until we read about it later [in "Crasher"]...turns out some Internet male porn star happened to be at the party, and he was doing some impromptu performing with his date on the back lawn. How the hell did he know about the party? I guess his date was invited."