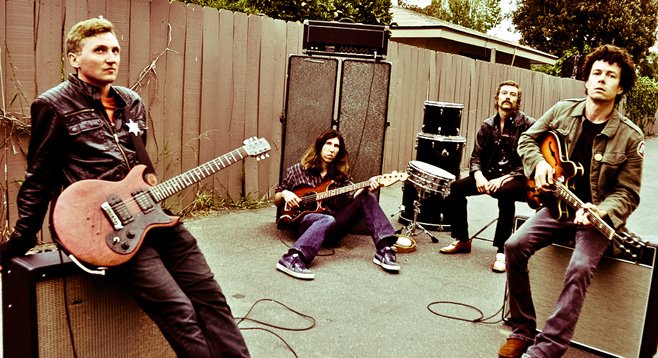 The Bloody Hollies were founded by singer/guitarist Wesley Doyle while still living in Buffalo, N.Y., in summer 1999, with a rotating roster of support players. The band was still based in Buffalo when they released their debut full-length Got It Where It Counts! (2002), followed by Fire At Will (2003).

After former Marine Doyle moved to San Diego in 2005, the lineup solidified with guitarist Joey Horgen. The band was later joined by drummer Matt Bennett and bassist Bort Eric Thunder.

Their third album If Footmen Tire You (Alive Records) was the first full-length they released from San Diego. After it won a 2006 San Diego Music Award for Rock Album of the Year, they soon found themselves invited to tour Europe.

“The first time we played Tromsö, Norway, we got there at noon and it was already dark,” says guitarist Horgen. “We sold out all of our merch two hours before we even went onstage.” Overseas, they play venues sized “between the Casbah and a 2000-seat hall” and usually earn three times what they would make at a U.S. gig. A Holland-based agent puts the tour together. They travel with a road manager who speaks six languages and acts as a roadie, translator, negotiator, driver, and merch boss.

Horgen says the European hookup was made before he joined the band two years ago. Since 2001, the Bloody Hollies have played Holland, Germany, Sweden, Italy, Austria, France, Norway, and Denmark.

“They don’t really receive a lot of bands over there. Plus, the name is a huge plus. It conjures up lots of visions. If I was some guy in Darmstadt, Germany, and I picked up the paper and saw the name Bloody Hollies, that would get my curiosity flowing.”

“Europeans, in general, are open to a lot more different things. They don’t even know what the word emo is. Europe is heavy into garage rock just as the U.S. is into manufactured pop.”

The Bloody Hollies did a 32-city tour of the U.S. in early 2007, which included a stop at SXSW in March. Their next European tour began June 1, 2007. At the 2007 San Diego Music Awards in September, the band took home the award for Best Alternative Album for Who to Trust, Who to Kill, Who to Love, their follow-up release to If Footmen Tire You.

In 2008, the band played on John Peel's BBC radio show and were featured on NBC's Knight Rider, which used their song "The Rain" as the background to an action scene.

Their full-length Yours Until the Bitter End was released in September 2011, available on CD Digipack, as well as a digital download, and a red vinyl edition limited to 700 copies. They added Australia to their list of conquered countries in November 2011.

On November 8, Cherry Bar owner James Young flew the hard-rocking San Diego band Bloody Hollies to Melbourne for two shows. Guitarist Joey Horgen describes the junket as “a test run” for an alliance between the band and Australia, adding, “James was happy with everything. He’d like to bring us over annually for shows and festivals.”

The Cherry Bar is on AC/DC Lane, and the band has mentioned AC/DC’s influence. Are there AC/DC songs in your repertoire?

“Nah, not really,” says Horgen. “‘Back in Black’ is a go-to riff between us at sound checks and practices. We played ‘If You Want Blood’ for the encore on the first night in Melbourne. After the show, James came up and said, ‘Joey, I want you to meet someone very important.’ I walked to the end of the bar, and there was this little guy standing there. James said, ‘You guys just played “If You Want Blood.” Well, if you want blood, you got it. This is Bon Scott’s son.’ Holy shit is what went through my mind — I didn’t know what to say. He grabbed my hand and shook it and said, ‘That was a fucking brilliant show, mate — fucking rocker!’ Then he looked me dead in the eyes and said, ‘Me dad would have been fucking proud.’ Jesus Christ! That was my highlight of the trip.

“The last night there, Matt [Bennett, drummer] and I were turning it on quite a bit, going to different bars in Chinatown. We went back to the hotel to see where the bass player, Eric, was. He was sleeping, as most people do at 3 a.m. We weren’t having it — we kicked his door open and tried to persuade him to come out. He wouldn’t budge. After an hour of trying to get him out of the room, we decided to bring the party to him. So we brought every piece of furniture from the living room and crammed it all in Eric’s room. I mean everything — couches, chairs, lamps; the trash that was on the floor. The dining room table wouldn’t fit through the doorway, so we had to take it apart and reassemble it in his room.”

In early 2012, they appeared on the Alive Records compilation Where is Parker Griggs, performing the song “Dirty Sex.” In February, they embarked on a Northern European tour in support of Yours Until the Bitter End.