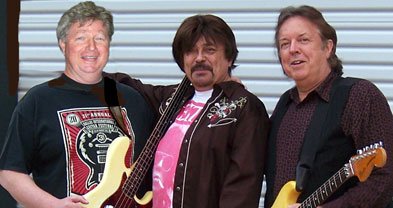 The Blitz Brothers were a popular rock band who frequently opened for touring headliners in the 1970s and 1980s. Richard “Blitz” Livoni began playing guitar at the age of eight and continued through college, eventually opening for the Nitty Gritty Dirt Band, Hoyt Axton, Tim Buckley, Jackson Browne, Linda Rondstadt, and others.

“I hated electric guitars when I was a little kid,” says Livoni. He liked jug bands. “Kazoos and shit.”

But when the Animals released “House of the Rising Sun” in the 1960s, Livoni says he went out and rented an electric guitar and amplifier. He taught himself to play Paul Butterfield’s East-West and every track on John Mayall’s Blues Breakers album as well. “I became a victim of the Jimi-Jeff-Clapton syndrome.” He laughs.

Livoni was playing in an Orange County band called Fast Eddie when he left them to start the Blitz Brothers in 1973. The original members were Livoni, Jamison, and a former Mickey Mouse Club Mouseketeer on drums and vocals named Dickie Dodd, a former member of the Standells who sang their big hit “Dirty Water.”

The Blitz Brothers made their name at L.A. clubs like Gazzarri’s, the Starwood, and the Pasadena Hilton. “Van Halen was our competition.”

By the time the Blitz Brothers migrated south to San Diego venues such as the Spirit Club, Ledbetter’s, the Palace, and Neutral Ground, Livoni had gained a reputation as a blistering-hot guitarist.

When Livoni shuttered the Blitz Brothers in 1986 (“One reason was that nightclubs weren’t drawing because of changes in the liquor laws”), he needed a job. “I put an ad in the Reader advertising myself as a recording engineer and I’ve been booked steadily ever since.”

The first Blitz Studio was in the basement of his home in Mission Hills. Blitz went on to record bands and write music in a private stand-alone state-of-the-art digital studio in south Mission Hills on Reynard Way, as well as playing with Sons of Edison.

A quarter century after they split, the band reunited on August 7, 2011, at Winston’s in OB. Why start over? The answer, Livoni says, is Barney Roach. “Being the big daddy of the band was no fun.” Roach, who will fill the spot once occupied by Danny (Jamison) Blitz on bass guitar, is the new hustle behind the organizing of gigs and rehearsals and all of the day-to-day tedium, says Livoni, that goes with running a band.

What’s in it for Roach? “I get to be in a band with one of my all-time guitar idols,” he says.

After the band reunited with Livoni and founding drummer Dickie Dodd, keyboardist Rick Randle was added to the lineup in early 2013. Livoni underwent an emergency surgical procedure on June 20 of that year, after suffering retinal detachment.

Danny "Blitz" Jamison, who played bass with the band for over 15 years, passed away in June 2014. "We went from Finnigan's Rainbow all the way to stadium shows," says Livoni. "He and I wrote hundreds of songs together and played our hearts out."

does anyone know where to get recordings of the blitz bros from back in the neutral grounds my rich uncles days??? After the original drummer was injured, they had drummer named eddie cota (i think). I'd think that Richard would have some of their original songs like "Silver Dollar" stashed away on either tape or digital...

Check out Youtube. I just posted a video of the Blitz Bros from about 1980 playing at the Bacchanal. "Sleepless Nights" There will be more to come in the next month or so. It's in the early days of video tape so, it's pretty grainy but the audio mix by Dave Henk our old soundman is pretty good. Here is the link: http://youtu.be/ZhamtLWdLOk. There are also about a half dozen live cuts of the current Blitz Bros on there as well. Check out The Blitz Bros "Last House On The Block" or "Voodoo Child". If you are interested I also have two CDs out under the name Sons of Edison that are fairly recent releases.