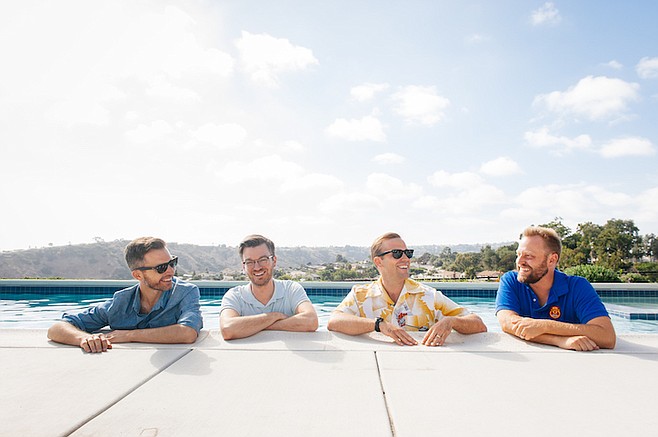 "We got our start in Michigan, during the garage rock revival of the early to mid 2000s, and released a few albums and toured the midwest and east coast a bit," says Dan Nordheim, guitarist for the Blanks. Their Center Street Sessions EP was released on cassette, followed by the full-lengths Kiss You On the Mouth and Love You Too. They recorded a live album at NYC's legendary CBGBs.

In 2005, everybody graduated college and moved to different cities, but continued to work on music. Members settled in San Diego, San Francisco, and St. Louis.

In early 2018, a new video directed by Dan Nordheim debuted for "I Didn't Ask For This," from their first new album in 13 years, Yellow Fading Glimmer, recorded in San Diego at Rarefied Recording.

According to Nordheim, "The album title takes its name from the track 'Sugar for Sugar,' which we’d never performed like it is on the album, with James [Peterson, singer] seemingly making up the lyrics on the spot. We chose it because we thought it fit with a lot of the themes in the record: getting older, having more responsibility, coming to terms with your lot in life, and personally for us it represents our own fading glimmer as a band."

The cover photo was taken by Nick Kintigh, stepbrother of drummer Mike Ried, who along with Peterson is one of two members living in San Diego when the album was released. Bassist Todd McKenzie was living in St. Louis.

Asked to describe the band's worst gig, the San Francisco-based Nordheim replied "A lot of strong candidates for this one, whether it was in Lansing with our own friends watching a muted TV instead of us, or in Philadelphia, with the sound guy giving us a thumbs down and then leaving the room. But the worst show had to be when we were doubled-booked at a place in Toronto, and Braid and Minus the Bear got all mad at us because they thought we were trying to crash their gig. We didn’t even really know who they were. It was the last stop on our tour, so we just drove home through to Michigan."

"Still haven’t actually played Toronto, but it seems like a very nice city."