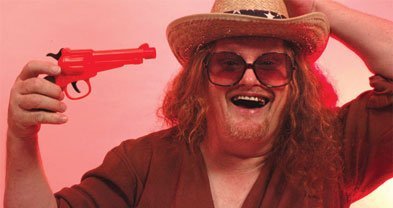 Sound description: Your subconscious wired to a synthesizer.

Bill Wesley moved to San Diego from Missouri in 1974. While still a teenager, he created light shows for Blue Cheer and Vanilla Fudge, with projectors that he “modified so I could use foot switches to turn them on and off like a drum set. I still do light shows, but public indifference has killed off what I believe is the greatest visual art form in the history of the world.”

The Golden Hill resident -- age 57 in 2011 -- is also a musician and inventor who has persisted in the quest to turn his electronic “array” instruments — the array mbira, array violin, and, “for rocking-out mayhem,” the array guitar — into must-haves.

“The Mboard I use...is patented, and we’re in negotiation to get it mass produced,” says Bill Wesley of the Array Orchestra. “The Sensor Array MIDI Controller Mboard will be like the musical Wii; ordinary people, even nonmusicians, will be able to shred.”

The Array consists of MIDI controllers that record which buttons you press, and then it relays the information to a computerized sound synthesizer that compiles the user’s chosen arrangements of musical notes.

Wesley is understandably proud of his homemade contraption (which, with its wood enclosure, looks more Jules Verne than Bill Gates). “I am finally finished with all 10 designs and have 7 functional electrified prototypes done and ready to shred. I also have their players in training. Meanwhile, it’s myself playing every instrument in the Array Orchestra...The universities didn’t invent jazz. It came from the street, so that’s where you’ll find me; in the streets.

“Pursuing this course has cost me dearly, in every respect,” says Wesley. “And others as well, [like] my business associate Shai Ben Moshe. Yet every moment and every penny has been worth it, because this is something of real historic power, however it plays out for us. In the end, we sidestepped our patent attorneys, and I and my mother rewrote it. I’ve had professionals tell me it’s a great patent - most patents are junk, because they will never hold up in court.”

Have orders from high-profile performers such as King Crimson and the Kronos Quartet meant an increase in orders from the website?

“[I get] four or five orders a month instead of one or two,” says Wesley. “Yet, 90 percent of them go to movers and shakers in the field of music — for expanding awareness, that’s better than 400 anonymous buyers.”

“That was a wish list,” says Wesley. “In reality, I expect a maximum of four people and instruments. There will be an after-party — perhaps there the Orchestra will get more of a chance to open up.”

Along with original compositions, Wesley mentions doing some covers.

“I’d like to do a million things...‘In-a-Gadda-Da-Vida’ or ‘The End’ or ‘Telstar.’ But, so far, just lining up the original songs is more than enough to fulfill, with all the invention and mbira-building and speaking and graphics.”