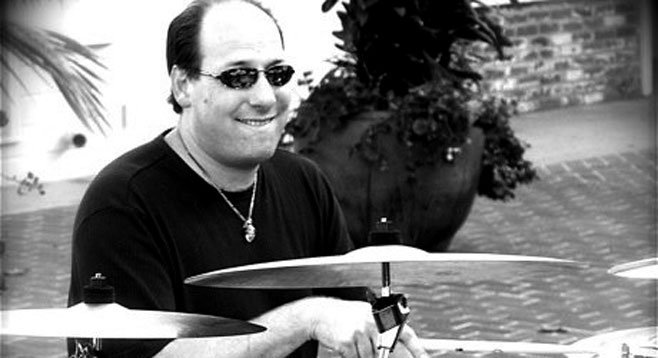 “I was raised on gospel music by a black Creole woman in Mississippi,” says drummer Bill Ray. He wasn’t always known by that name. “I had a pseudonym in my formative years in Mississippi. I suppose it had something to do with wanting to escape from the doldrums that was Jackson in the late 1980s.”

He discovered another way to escape the doldrums the first time he got drunk. “I was 15 years old in Jackson, with a bottle of Cuervo, in a darkened closet between two speakers, while Metallica’s Ride the Lightning was piped into my head at about 110 db. I almost joined the 27 Club [musicians who died at age 27], as my sister and her friends found me retching my lunch. Because I slept on a bare waterbed mattress for the remainder of the drunk, which was like sleeping on an iceberg, the hangover wasn’t too bad the next day.”

Ray -- who once wanted to be a heavy-equipment operator -- has played with dozens of local groups (Tubby, Playground Slap, the Wild Truth), though he’s probably best known from Ike Turner’s band the Kings of Rhythm, having appeared on the late rocker’s Grammy-winning 2006 album Risin’ with the Blues.

Ray was in Turner’s house when he died in San Marcos on December 12, 2007. “He was surrounded by his closest friends. That screwed me up for a couple months...Ike said he was tired and he just wanted to go.”

He says Europeans were a lot kinder to Ike. “We were never looked down on in Europe, that’s why Ike always liked to play there. The crowds there never judged him. They looked at him as the man who created rock and changed our culture.” In the U.S., “People would always sneer at him, but he’d always smile back...People wouldn’t let him live down his worst mistake, his worst moment in life.”

Ray posts solo drum tracks at BillRayDrums.com, inviting others to download and create their own songs around his beats.

“Neil MacPherson has been creating melodies and lines to some tracks,” says Ray. “Smooth-jazz guy Bill Cornish turned in a tune, and Dog Plays Bass from Craigslist sent one along. A guy in Austria sent back a death-metal version to one of my tracks. I’m waiting for the gangsta rappers to start sending me squished, remixed, and tripped-out versions.”

He gives away the drum tracks for free. “There’s no way anyone can keep a lid on digital media anymore. You might as well go in prepared to give it away and hope that somehow good things come around.”

As to his motivation, Ray says, “I’m an artist, and these are my paintings. Use them as you see fit. I draw lines around musical shapes and expect others to color in the parts. Ultimately, they are there for collaborating, songwriting tools, looping, and remixing. The main goal is to get people hooked on my feel during songwriting sessions. Then they may be compelled to call me for their studio work.”

In 2011, Ray left for Paris, France, to promote his sponsorship for Supernatural Cymbals, which manufactures handcrafted Turkish cymbals out of Istanbul. From there, he toured Holland in March with soul trumpet player Ernest Lane. He spent July 2011 touring with local Sublime tribute band 40 Oz. to Freedom, followed by a tour of Moscow and Germany with Coco Montoya.

In spring 2012, when the Art Institute of San Diego needed a guest with pro music experience to speak to one of their audio production classes on the subject of freelancing in the music business, they tapped Ray. “I talked about how I’ve done it all these years. And, pretty much,” he says, “I’ve done it the wrong way.”

“The first thing out of my mouth was, ‘You’ve got to get the hell out of San Diego. This is a vacation spot. And, there are so many bands and musicians here that club owners can be opportunistic.’” He talks about a local venue nixing comp drinks for musicians. “They wanted to charge me for an iced tea. I said, ‘What, ice costs you that much? Then how about I just play drums with only one arm?’”

But if Ray has freelanced the wrong way all these years, what, then, is the right way to be successful as a hired gun in the music industry?

“I basically told them the devil’s in the details. What’s on paper...what sort of agreements you’ve forged. I’ve played on over 150 albums...almost none of them were paperwork-documented. Most of the time, I worked like Hal Blaine and the Wrecking Crew,” meaning work-for-hire situations that pay a session fee but zero royalties.

“You need to look at all the other aspects, like publishing. In the end, who’s making out with the cash?”

In Autumn 2012, Ray landed several gigs with Earl Thomas & the Kings Of Rhythm. “We played Joshua Tree Music Fest, performing the music primarily of Ike & Tina Turner,” he said on his return to San Diego. “There's an album in the works that we tracked and it's in the pipe for release. It's going to be fantastic.” Ray recorded an earlier album in 2009 with the Kings at Biscuits & Blues in San Francisco.

As of 2013, Ray was playing with Nice World and the Odd Get Even and was a webmaster and writer at Notsomoderndrummer.com. The busy drummer was in L.A. on September 29, 2014, being interviewed for the TV show Unsung about his years playing in the Ike Turner band.

"After 26 years in San Diego, I'm relocating up to Seattle at the end of September," reported the prolific drummer in summer 2015.