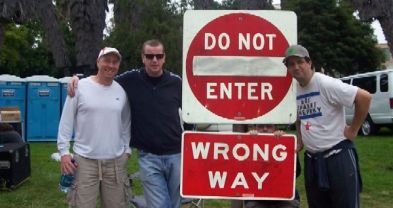 Sound description: Sounds of the ’70s by guys who were there when it happened.

The Bigfellas are a group of boomer-age rockers founded in 2002 by Charlie Recksiek and Tim Gadzinski. The duo recruited drummer Shay Bell through a Reader classified ad, and the group was filled out by Shaun Randall (guitar) and Tim Hempstead (bass, vocals).

Recksieck says being known for their bawdy tune “I Wish That I Were Gay” has its plusses and minuses. “The good side is it gives people something to remember you by, but we’ve taken crap for it. We know you won’t get booked at street fairs and family stuff like that. It has cost us there. And [our booking agent] dropped out because she said she had a gay nephew. We were all scratching our heads. It’s just a song.”

More audience-friendly is their offbeat cover of "Mr. Blue Sky" by Electric Light Orchestra, which the Bigfellas reworked around the banjo.

Though comedic performers like the Beat Farmers, Mojo Nixon, and Steve Poltz gained prominence in San Diego, Recksieck notes that currently there aren’t many humorous bands. “This is not a farm team for us to get on MTV. We’re not playing for any goal other than having fun. Our local scene is entirely too serious. Every local band with six people in their audience thinks they are rock stars.”

Tim Gadzinski is no longer with the band.

In 2012, they released a new full-length, Don’t Change The Subject, as well as starting work on a planned Christmas CD.