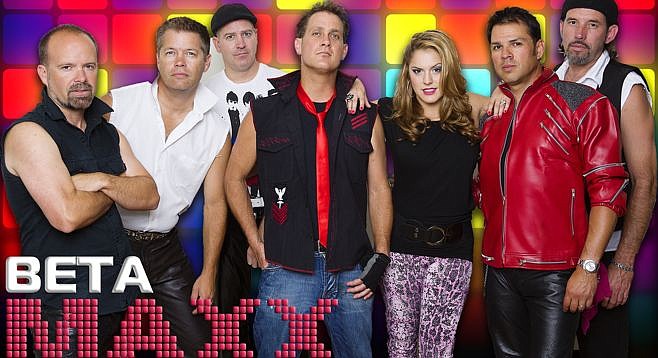 Sound description: Sounds like a Top 40 cover band from 1989.

Betamaxx is a 1980s cover band made up of veteran musicians playing in bands and musical projects in the Southern California area.

“We’re not trying to duplicate any particular band,” bassist Andy McRory says, “or even a genre like big hair metal.”

“We’re like a Top 40 cover band from 1989,” according to singer Kirk Howe. “We have an ‘80s look with an updated feel. The whole premise of the band is to do ‘80s danceable music, and not just the top 20 hits,” he says, “but the deep cuts. Familiar stuff that people will say they haven’t heard in a long time.”

“Or, anthem-style tunes,” Valenzuela says. “Those are songs that are typically not danceable, but they strike a chord with a listener.”

An example of an un-danceable anthem? “Don’t Stop Believin’ by Journey.” “It’s about the opening chords,” says McRory, “the ones that really get a reaction.”

Howe: “Our audiences are people in their ‘50s, tourists, all the way down to guys in their twenties on leave from the Navy. They’ll hear the first three notes of ‘Sweet Child of Mine’ and the dance floor will fill up. It’s like throwing a switch.”

Valenzuela: “It’s interesting to see the twenty-somethings on the dance floors that know the words to every single song we play,” says Valenzuela, “even though they were not popular in their day.”

But the band actually started in 2009 at a 40th birthday party jam. “We all knew ‘80s songs,” says Howe, "and it went pretty well. We decided to start a tribute band.”

“It allows us to replicate a lot of songs without using backing tracks, like a lot of ‘80s bands do. We’ve never used them.” The Disco Pimps, he says, do.

“What you’re hearing,” says Howe, “is being played on the stage by someone.” Certain sounds, he admits, can be difficult to recreate. “Like Depeche Mode songs. They’re all keyboards.” But he says the extra effort is worth it. “We’re giving it to them live, like it used to be.”

The group was nominated Best Tribute Band at the 2012 San Diego Music Awards.