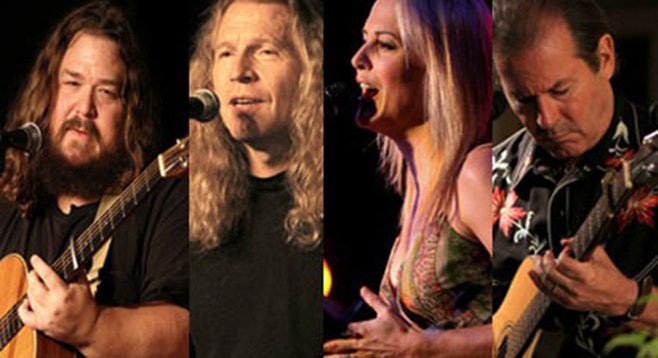 “It’s euphoric to sing in a four-part harmony band,” says Jeff Berkley, one-fourth of Berkley Hart Selis Twang. “It’s joyful and feels like you’re gonna lift off the ground. I think the audiences feel that, too. That’s the way they talk when we hang out after shows, anyways.” The quartet features Berkley with frequent collaborator Calman Hart, along with acoustic songstress Eve Selis and her longtime guitarist Marc “Twang” Intravaia.

Their debut album, with songs co-written by all four members, was released in October 2014. The writing/recording process was unlike typical Berkley Hart or Selis Band projects. Says Berkley, “Everything is a little different. The main thing is the writing. Truly writing with four people, where everyone is involved in the process from beginning to end, isn’t usually easy, much less even really possible. Artists don’t often play well together. This wasn’t like that at all.”

The group appeared to go on hiatus in 2019 when Eve Selis posted online about no longer working together with Marc Intravaia. The guitarist replied “Eve and I remain friends and will always be friends. We did not have a fight or a blowout or anything of that nature. The fact is we just drifted apart musically. It’s been happening for the last couple years and now she is on a much different path than me.”