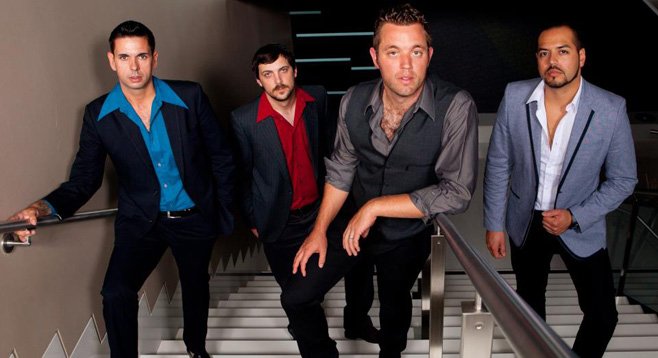 The Beautiful View (the English translation of Chula Vista) is four friends who met in high school, started a band in 2007, and played as many live shows as they could in the next four years. When they had their act down and enough material was in the can, BV took a year off to record their debut full-length album.

The bandmembers -- vocalist Aaron Magnan, Adrian Cordero on guitar, bassist Paul Rich, and drummer Duane Allan -- favor Gucci shoes and tailored fashion, which is in contrast to their indie rock sound. Escovedo thinks that the Beautiful View conjure images from the Miami night club scene in Scarface, possibly because they grew up in Chula Vista, a border town.

Chula Vista, border town that it is, has a rich tradition of successful artists ranging from Black Heart Procession, Roots Covenant, the Zeros, the Dragons (Mario Escovedo’s old band), and hardcore Jesus-rockers P.O.D. Tom Waits went to Hilltop High School in Chula Vista, and Rosie and the Originals had a pre-Invasion hit song on Top 40 radio and performed all over Chula Vista and National City while they were still a hot item back during the 1960s.

“When I consider a band,” says Escovedo, who comes from a musical lineage that includes Pete and Coke and Alejandro and Javier and Shiela E., “I think not so much about if they are cool here and selling out local venues, but more importantly, how they’ll be received on a national level.” He thinks that the Beautiful View has what it takes. He says the band reminds him of another band that played local before they went big.

“STP opened for the Dragons, back when they were called something else. I remembered this great, big sound, and I get that same feeling from this band. The songwriting’s there, they have a big, fully formed sound. I think there’s an audience for them, and the genre’s there. They can be a massive band.”

In 2011, signed to Mario Escovedo’s Requiemme label, the Beautiful View recorded Life is Beautiful. The band chose to work with Mario Quintero at Black Box in San Diego and mastered the ten-song disc at D2 studios in Burbank.

The full-length spawned a video for “The Horseman,” released shortly before the band played the annual SXSW music fest in Austin, Texas (March 16 and 17, 2012) and then embarked on a U.S. tour.