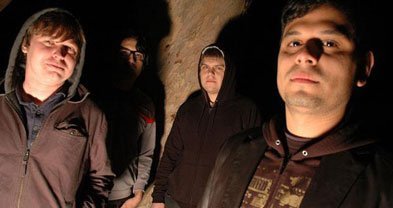 “A lot of our lyrics in the past have revolved around El Centro desert and being kinda stuck,” said Batwings singer/keys/bassist Robert Lopez in 2010.

“There’s definitely a sense of escape when you move out of that place,” drummer Sebastian Ulloa added. “I don’t think any of us would consider going back there to live, but I’m glad I grew up there. It gives you character.”

“It’s a lot of fun down here,” says guitarist Larry Stage. “It’s like a second home.”

“There’s a different energy from the crowd,” guitar/vocalist Bryan Oczkowski adds. “They’re really into it.”

“It’s a sign of affection, I guess, but they throw beer on you all the time,” Sebastian laughs.

Bandmembers speak fondly of the “Scolari’s days” in North Park, which ended when the bar changed hands in 2008.

“We were part of that short-lived generation,” Sebastian says. “The live, local music is different now. Everything’s kind of slowed down. I think we’re a bit more trepidatious to go out and play as much as we did.”

Playing up to three times a month when they started in 2005 alongside groups such as Chinese Stars, Fever Sleeves, and Maniqui Lazer, Batwings slowed down in 2010, only playing a handful of shows.

“We’ve managed to stay together as a band, even though Larry is double majoring, Bryan’s almost done with college, Bobby just got married, and I just finished some postgrad work and am working as a teacher,” says Sebastian. “The fact that we’re still together is a feat in and of itself.”

Much of 2010 was instead spent recording in UCSD’s Conrad Prebys Music Center. “I feel like our music has gotten a lot more textured,” Sebastian says. “We’re doing stuff in different times, but we’re still keeping it fun and energetic. With the new album we’re learning how to play our instruments again.”

After recording with the group at UCSD's Conrad Prebys Music Center, Lopez left the band in to play with Boo Report, Cub and Pony, and Giraffe Ears. Bass duties were taken over by guitarist Larry Stage’s brother Scott Stage (SnailS!) and Mexicali native Carlos Quintero (Lipstick Terror, Chrome Eye) joined on vocals. Guitarist Bryan Oczkowski left San Diego to take a job in Providence, though it was announced that he would remain a recording (and occasional performing) member of the band.

Their 5-song La Maldición EP was released in September 2012.