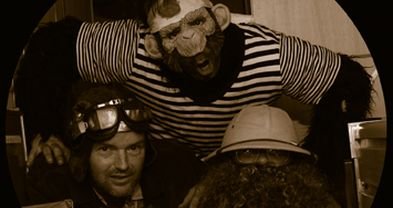 Batar-Zan is a cabaret/concept band featuring characters such as Stevezan, "an unknown, undecorated, unwanted, underachieving, and uncaring World War II fighter pilot, whose plane went down in the jungle," Jimzan "the un-monkey-like chimpanzee," and Fipzan, "a world-renowned anthropologist."