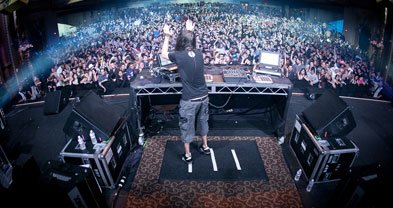 Bassnectar, aka Lorin Ashton, is a freeform electronic music and dubstep artist, DJ, and producer based in Santa Cruz and San Diego. By combining sound and force with weight, the Bassnectar experience engulfs the senses. It is as physical as it is auditory; the adventure has no rules, no limitations, and no hesitation in fusing the familiar with the strange or the classic with the cutting edge.

Which pushed him harder as an artist, playing bass guitar or being a DJ? Neither, it turns out. “I dive in head first, and it feels completely natural.” A festival favorite, Bassnectar prefers headlining his own events. “I get to play for two hours or more, and the crowd is there to take a trip. We go on a journey together. Usually there are several hundred people who are traveling along for the ride from city to city, so it becomes an immersive experience.”

Since 2001’s Freakbeat for the Beatfreaks, there has been a Bassnectar CD release almost every year, up to 2011’s Divergent Spectrum. Add to that EPs, singles, podcasts, and prodigious social networking (over 591,000 people “like” him on Facebook), and it’s been a busy decade of touring and producing for the raver who took his name from a bumper sticker: Butterfly Beings Drink Bassnectar.

Asked if fans have ever complained about his habit of taking the mic and talking politics mid concert, he says, “I don’t start talking politics or anything, but I am a free-thinking person, and I am expressive. I like to connect on many levels with people, not just musical. People don’t seem to complain too much at shows because they are busy losing their minds and going completely buck wild.”

Whether remixing, collaborating, writing, DJing, performing live or working on constant social networking, Bassnectar’s music is the lure and social impact is the sincere intention. According to Ashton, “We are so blessed, and so deeply fortunate to be alive and awake right now…it’s a basic truth, but it’s very powerful. I think privilege confers responsibility, and Bassnectar is a reflection of that opportunity to give back; the motion of my cells bouncing back at the world.”