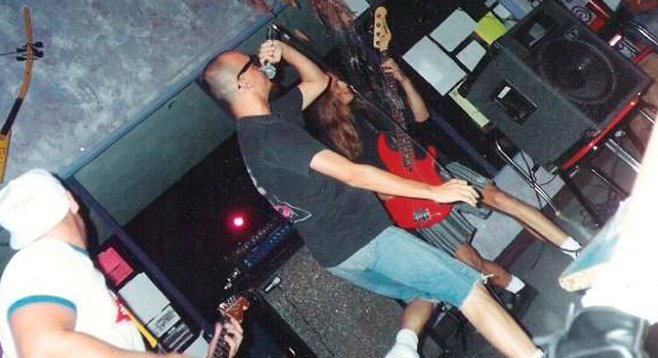 Baldheaded Jesus was formed sometime in 1989 by Bub and Paul Norris (aka Mr. Bitter). They were living with Mike from Psychic Zoo, who got sick of listening to them talking about being a band and booked them a show at Soma, giving them about two weeks to find a bass player and a drummer.

Dave Shingles and Steve "Kookie Joe" Carner jumped in to play with them. The show went well and they were off, playing their wacky brand of hardcore punk in a sea of metal rap wannabes and death metal screamers. If anything separated them from the other bands of the time, it was that they were a true punk band. Flying by the seat of their pants, writing songs at Denny's with their pack of friends the PIC, taking any and every gig they could get their hands on, and offending everyone they encountered along the way. At half of their shows, the PAs were turned off to stop them from playing. Except at Soma, where they excelled.

They had some catchy punk tunes, "Ima Cow," "Soda Pop Junkie," and "I Don't Know" being some of the most memorable. Unfortunately, as with most promising young bands, they were also huge mental cases. Egos clashed frequently, causing members to be kicked out and reinstated at a moment's notice. Finally, in 1992, the band broke up permanently. Bub got married. Mr. Bitter started the Abuse, with Frank and Rich from Psychic Zoo. Dave and Steve started up Uncle Joe's Big Ol' Driver.