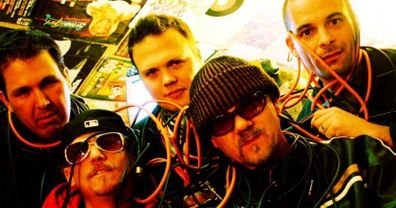 After years of playing professionally live and in the studio, longtime San Diego musicians Chuck Schiele and Mike Head got together. The first thing they did was throw everything they knew - including sage advice, the rules of the road, and any attempt at “cool” - right out the window, like a bad piece of Velveeta. They decided to have fun instead.

Bad Science Fiction doesn’t give you a set of music; they deliver a complete and total sensory overload. Think Black Sabbath and Alice Cooper. Think Portishead. Think Snoop. Beck. All at the same rave. An appetite for anarchy that begins at the same party. It’s loud. It grinds on a big house beat. Guitars wail with abandon like a seriously lousy attitude.

The guys in Bad Science Fiction say, “Noise is a favorite little plaything. In the meantime, we’ve all played-in and seen professional this and professional that, from slick to sick. Frankly, we’re bored. We don’t wanna fit in to the usual mix. All this occurred to us at a Spam-eating contest while drinking PBRs, thus forming the band. And that’s when we lost our heads about it. So, we turned our amps up all the way to eleven.”