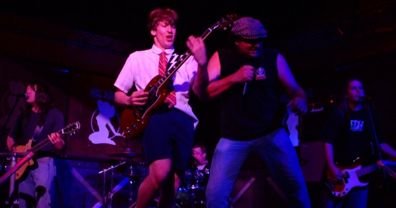 Based in Del Cerro, Back 2 Black Back is an AC/DC tribute band, specializing in the Brian Johnson era. “We started this band in November of 2009,” says drummer Brad Kirkbride, “but didn’t get everything in place until around January or so. We rehearsed once or twice a week for about four months, and then we started playing out.”

They often perform the landmark AC/DC album Back in Black from beginning to end. “There is just something magical about the Back in Black record,” says Kirkbride. “Those songs have a special place in people’s hearts. It sold 49 million copies for a reason. But we also do a bunch of other Brian Johnson songs and seven or eight Bon Scott songs.”

The band is meticulous about duplicating the smallest details, right down to the clothing and the vintage guitars and amplifiers favored by the real AC/DC. “Well, Paul has the whole shot obviously, the schoolboy outfit and the [Gibson] SG. Cap wears a wig with jeans and a T-shirt. Sammy wears the traditional Brian Johnson outfit of jeans, sleeveless T-shirt, and the newsboy cap — Steve kind of looks like Cliff Williams anyway. And I just wear a dark shirt like Phil Rudd wears, and our hair is pretty much the same.”

Cap Lillard delivered an impeccable tribute to Malcolm Young that included the original guitar and amplifier combination right down to the settings. He even had Malcolm's stage moves (sort of a limited hopping-in-place thing) and his vocal harmonies dialed in. The band lost the University of Tennessee trained economist when the guitarist moved back to his Atlanta hometown.

Kirkbride says the band aspires to capture the essense and convey the message of AC/DC. Which is “Getting with girls, and getting hammered, and then describing the details of the night.”

Their former guitarist Cap Lillard passed away in his sleep on October 8, 2012, apparently from complications related to diabetes. A tribute concert was staged October 26 at Padre Gold, featuring Back 2 Black and Rushed.