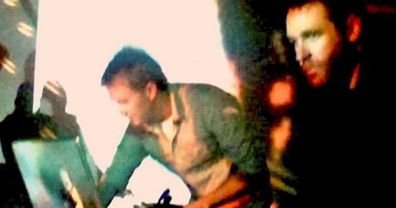 AVicious is an event visual design crew which does electronic multi-media performances using computers and lighting, resulting in a sort of live DJ performance art. Closely associated with Transfer, the group appeared at the 2009 SXSW festival in Austin, Texas.

The crew began in late 2008 as a partnership between John-Ryan Shea (the VJ) and Jeremy Glaholt (the Designer). "AVicious are performers, technicians, builders, designers and implementers of today’s new brand of visual experience," according to their website. "Be they for museum installations, DJ nights, rock shows, [or] corporate events, the live visual performances are fully customizable, controllable and improvisational."

SDSU film school grad John-Ryan Shea - aka VJ JRS - began VJing in 2005 as part of the Visual Underground Series, a monthly film, rock and art showcase held around San Diego. In covert, he has accompanied locals like Grand Ole Party, Scarlet Symphony, Vena Cava, The Transit War, Goodbye Blue Monday, Rob Crow, The Truckee Brothers, The After Party and others. After the Visual Underground dissolved in 2007, he became closely associated with Transfer, who sometimes refer to him as a "fifth member."