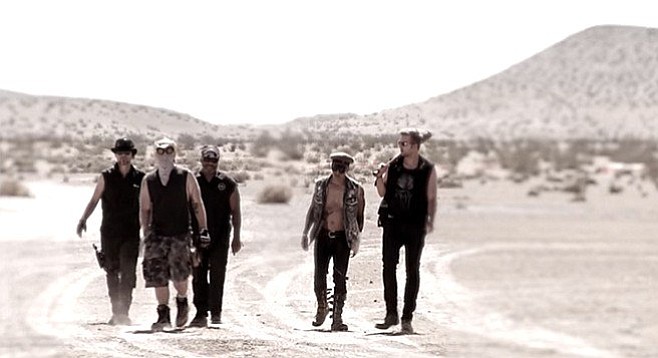 Authentic $ellout was formed in 2006 by singer Sulo King and bassist Andy Danger, with Marky Unknown on drums and Jeff Spicoli on guitar. In December 2007, Spicoli left to focus on his own band, Dante's Boneyard. In January 2008, Dingo joined the band as a full time guitar player, though he was replaced at the end of the year by Timmy Two Times, who was replaced in mid-2009 by Jeremy the Germ. The group split around 2010, as King became more involved in concert promotion.

However, “I realized that booking and promoting shows was a risky business to be in, and it wasn’t a sufficient way to make a living,” says King, whose career in concert promotion included a trouble-plagued run in San Marcos that began in early 2005. The Jumping Turtle incurred several well-publicized legal snafus, some involving Sulo’s attempts to stage all-ages events where alcohol was also served to adults.

“I started off by working at Canes Bar & Grill as a security guard and working my way up to being the head talent buyer and booking agent for Brick by Brick, where I worked for eight years,” says King. “I ended up getting laid off in 2010, unfortunately.”

After taking a job at Unique Pawn Brokers, “I decided to either open up a recording studio or buy an existing one. I realized this while hanging out with my friend and now business partner Frank Torres.” Last summer, the duo responded to a Craigslist ad placed by Mario Quintero at Black Box Studio, opened in November 2005 just off 25th Street in Golden Hill.

King (who studied recording arts at MiraCosta College in Oceanside) and Torres (with a B.A. in audio production) made a deal to acquire the 2900-square-foot facility, renamed Iacon Sound as of October 1, 2012. It closed at the end of 2019, with Torres continuing under the Iacon name at various locales and King seeking a permanent location to include rehearsal rooms.

“So I’m getting my band Authentic Sellout back together to write and finally record the album I’ve been trying to put out for years,” said King in February 2013. “Now that I have my studio, I can do that. I just wrote a new song on my acoustic in my lobby. I look forward to showing it to the rest of the band so we can hopefully turn it into a song. We’ll see.”

After songwriting sessions with Christian Borja, a new video debuted in February 2018 for their track "Radiate," shot when they played the apocalyptic Wasteland Weekend fest. Iacon Sound closed at the end of 2019, with Torres continuing under the Iacon name at various locales and King seeking a permanent location to include rehearsal rooms.

Is that his real hair???? If yes, I need to know his secret.