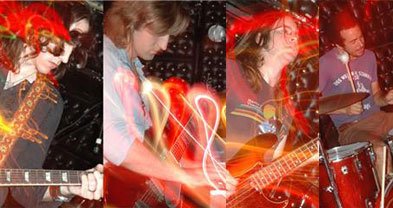 Sound description: Psychedelic and progressive pop-rock. Songs sound like mildly crazed pagan folk music, furiously performed by several small species of furry animals gathered together in a cave and grooving with a pict.

You're not having an LSD flashback. The psychedelic sounds of Astra (formerly known as Silver Sunshine) come courtesy of guitarist Richard Vaughan, bassist Stuart Sclater, guitarist Brian Ellis, and guitarist/organist Conor Riley, who frequently whips out a vintage Mellotron, just in case anyone misses the band's intent to supply the missing link between Rubber Soul and Radiohead. Drummer David Hurley (formerly of Dura Mater) brings his own flute and a fully operational sci-fi Moog synthesizer to the acid-drenched analog party.

The band formed in 2001 and was signed Rhode Island-based Empyrean Records. "Our music is sometimes heavy, sometimes gentle, but always freaked," says Vaughan. "Lately we've been digging on heavier, progressive, and wyrd-folk sounds."

After being signed to Rise Above Records (Witchcraft, Sleep, Electric Wizard), Astra's 2009 debut album the Weirding was released as a two-album vinyl set and on CD, with cover artwork by Arik Roper.

In November 2009, Astra's cover of the Pink Floyd song "Empty Spaces" appeared on a Wall tribute album packaged with British music magazine Mojo, issue number 193. Astra and Rafter Roberts (who performs “Happiest Days of Our Lives” on the same disc) are the first San Diego artists to be included on a Mojo compilation CD in the magazine’s 16-year history.

“Mojo contacted us and our label about this project they were working on,” said guitarist Richard Vaughn. “They asked if we’d be interested. They thought we’d be a good fit.” The band is signed in England to British indie label Rise Above Records and in the U.S. to Metal Blade.

Astra was allowed to choose the track it wanted to record for the Mojo album, with the recording costs picked up by Rise Above. The song was recorded at producer Mike Kamoo’s Earthling Studios in El Cajon. “A few of our original choices had already been taken by other groups. For instance, our label mates Diagonal swiped the track ‘Stop’ from under our feet,” said Vaughn.

Though Astra has built a fan base in the U.S., their biggest market is Europe. Vaughn isn’t surprised. “Our label is based in London,” he noted. “But we are very happy about the buzz we seem to be getting in Europe, as most of our musical influences — King Crimson to Black Sabbath — are from there.”