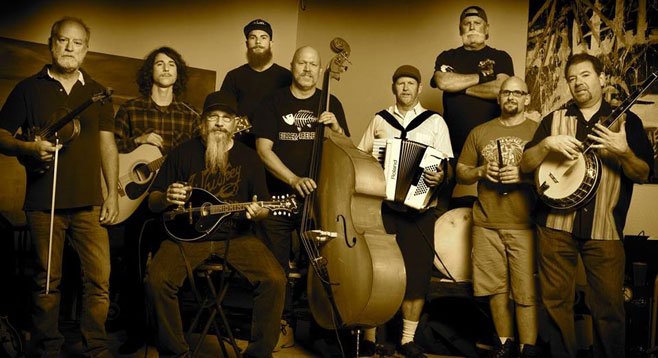 Formed in 2011 by members of the Fairfield Fats Band, Superkeltic, Enuf, and the Clairemonsters, Ass Pocket Whiskey Fellas perform Irish traditional and rock music. Founding members George Davis (who picked up the mandolin late in life), Jack Laux, and Steve Hoshko, are frequently accompanied by Davis' guitarist son Justin and fiddle player “Flying” Floyd Fronius, and up to a half dozen other rotating players, many of them with decades of gig experience.

“When we first started playing together, our former cajon player would bring a chilled flat pint bottle of whiskey to each practice,” Davis says of the band’s name. “And when I was a kid, my dad would smuggle them in the house in his back pocket, since he wasn’t supposed to be drinking anymore. He referred to them as his ‘ass pockets of whiskey.’”

The band's live sets mix originals with classic country, bluegrass, traditional Irish, and Zeppelin, all the while expressing their love for traditional Irish music and its connection to American bluegrass and country, as well as its rock and roll roots.

Davis considers the group a Clairemont band. “We used to play huge parties in Clairemont, right across the street from Clairemont High,” he says. “I graduated in ’76. [Cameron] Crowe showed up a year later,” he says of the filmmaker who embedded himself in Clairemont High to gather material for Fast Times at Ridgemont High.

I have seen this band play everywhere and they are the BEST Irish band in San Diego. You are guaranteed to have a great time. Rumor has it that they are playing at The Fields this Friday night June 13, 2014. Come out and show some support and have a grand old time. Just an FYI they obviously Love Whisky but they Love their I.P.A's Yay Yay. So go ahead and buy them a round, its well worth it.