Fronted by Gary Jeffries (Broken Rule), Southern blues rockers Asphalt Ballet were among the commercial-sounding San Diego acts snapped up by major labels in the early Nineties. After making their own deal with Virgin Records in late 1990, they released a self-titled album that spawned one minor radio hit, “Soul Survive,” a popular staple on the MTV program Headbanger’s Ball.

While touring behind their debut, singer Jeffries quit the band, later fronting Alligator Stew. The band went on for a while with a substitute front man before calling it quits around 1995.

As of summer 2009, the band appears to be reunited and recording a new album, with Jeffries (now living in Ohio) again manning the mike. The reformed lineup also includes guitarist Danny Clarke (now living in L.A.), guitarist Julius Ulrich, and drummer Mick Kiner (Ghoulspoon, Arm the Angels). As for the band’s original bassist, according to their MySpace page, “Terry Phillips is MIA.”

In 2011, band lost guitarist Julius Ulrich and drummer Mick Kiner, both of whom went on to Vagabond Junction. 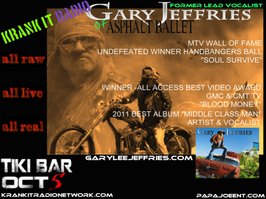