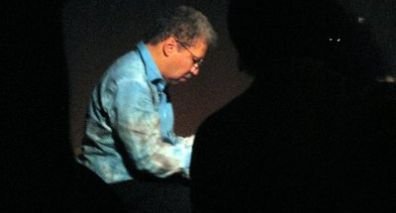 Composer Anthony Davis turned down the opportunity to become a household name in 1971 when he declined an invitation to join the Grateful Dead after they heard him playing in a small club in Iowa. “I was 18 years old and still living at home. My parents said, ‘You’ve gotta finish college!’”

Any regrets? “No, not really. I had a very practical reason for staying in college. The draft was still on, and I had a very low number. All things considered, things have worked out really well for me.”

Nowadays, Davis is known for his operatic, symphonic, choral, and chamber works. Davis had already recorded two galvanic titles by the 1980s, "Of Blues and Dreams" a free jazz classic with Leroy Jenkins, Abdul Wadud and Pheeroan ak Laff, and the Balinese inspired, "Episteme" with a large ensemble featuring George Lewis.

As a pianist, Davis has absorbed influences from the jazz and classical disciplines into his own personal aesthetic; Monk, Stravinsky, Ellington, and Debussy are a few of his formative inspirations.

He made his Broadway debut in 1993, composing the music for Tony Kushner’s Pulitzer Prize-winning play Angels in America: Millennium Approaches. His music is also heard in Kushner’s companion piece, Perestroika, which opened on Broadway in November 1993.

As a composer, he's best known for his operas, most notably X, The Life and Times of Malcolm X, which played to sold-out houses at its premiere at the New York City Opera in 1986. The recording of X was released on the Gramavision label in August 1992, and received a Grammy nomination for Best Contemporary Classical Composition.

"[X] has brought new life to America's conservative operatic scene," enthused Andrew Porter in the New Yorker. "It is not just a stirring and well fashioned opera -- that already is much -- but one whose music adds a new, individual voice to those previously heard in our opera houses."

Davis's second opera, Under the Double Moon, a science fiction opera with an original libretto by Deborah Atherton, premiered at the Opera Theatre of St. Louis in June 1989.

His third opera, Tania, with a libretto by Michael-John LaChiusa and based on the abduction of Patricia Hearst, premiered at the American Music Theater Festival in June 1992.

A fourth opera, Amistad, about a shipboard uprising by slaves and their subsequent trial, premiered at the Lyric Opera of Chicago in November 1997. Set to a libretto by poet Thulani Davis, the librettist of X, Amistad was staged by George C. Wolfe.

Davis joined the faculty of the UCSD Music Department in January 1998. As a pianist, he leads the ensemble Episteme. In 2013, his collaboration with Wadada Leo Smith, Ten Freedom Summers, a four-disc release containing four and a half hours of music, was nominated for the 2013 Pulitzer Prize in music, making the final cut of three.

Davis’s 2016 opera Five is a work that documents the infamous case of the Central Park Five, which made its debut in New Jersey. Donald Trump plays a central role. “He started a cultural war with his rage back then that we haven’t really recovered from. He was demanding the death penalty for these young men [all five were exonerated after years in prison].”

Davis' next opera, Darkest Light in the Heart, is “about the church shootings that [white supremacist] Dylan Roof committed,” he says, “although I don’t actually use his name. He’s a character, kind of a specter, but he doesn’t say anything, which is appropriate, because he didn’t say much when he was shooting everybody. The opera isn’t really about him — I didn’t want to give his ideas a voice — you see him with his gun but he’s really kind of a ghost.” The opera was set to premiere at the Spoleto Festival in Charleston, South Carolina, in 2020.