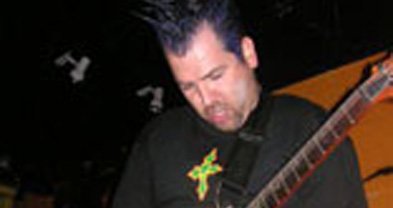 Sound description: Early Metallica being played through a woodchipper.

Eric Beard's credits as a musician stretch back some 20 years, though it's his recording degree from Chico State that allows for some of the bigger technological leaps in his stage act as Angerhead, the one-man metal band. "First of all, I never was a singer, and some people probably would say I'm still not," he laughs. "But singing and playing guitar at the same time is still a challenge. Also, I play video behind me along with bass parts I record and drums that I program, so synching everything up is definitely the most trying and challenging thing."

Beard began playing piano at age eight. "But as soon as I heard the first three chords of AC/DC's 'Highway to Hell,' I said to myself, 'You can't do that on a piano,' and I went and bought an electric guitar for $125." He calls Angerhead's music "a blend of rock and metal. I like to keep things intense and heavy. All my songs must have this quality." Beard also promotes North County music events through his company Man Down Productions. His day job involves repairing and selling dental equipment.