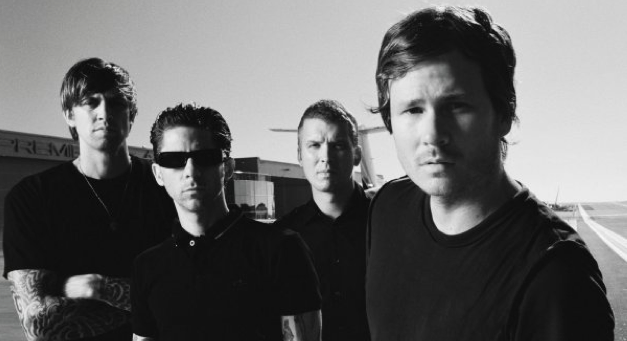 Sound description: What do you get when you cross blink-182 with Pink Floyd?

Angels & Airwaves (AVA) is an alternative rock/post-grunge/progressive rock band that was formed by former blink-182 and Box Car Racer guitarist/vocalist Tom DeLonge. The band originally included David Kennedy (notably from Over My Dead Body, Hazen Street, and Box Car Racer), and Offspring drummer Atom Willard. Angels & Airwaves released their first single, “The Adventure,” on May 18, 2006 and their debut album, We Don’t Need to Whisper, on May 23, 2006. Bassist Ryan Sinn, formerly of the Distillers, left the band in early 2007. Former 30 Seconds to Mars bassist Matt Wachter joined the band after Sinn’s departure.

On June 18, 2007, the band released a newly designed website depicting a motorcyclist and a flash application with flashing text advertising their upcoming album, I-Empire. The flash application also played a short music clip from I-Empire, along with a portion of the message from President Eisenhower via the Project SCORE Satellite in 1958: “Through the marvels of scientific advance, my voice is coming to you from a satellite circling in outer space... Through this unique means I can say to you and to all mankind, America’s wish for peace on Earth.” The flash application ends with the quotation “If I had my own world... I’d build you an empire....”

They performed September 7, 2007, at Copley Symphony Hall for the opening of the surf film Trilogy, which features AVA on its soundtrack. Their second Geffen Records album I-Empire was released in October 2007, debuting at #9 on the Billboard 200 album chart.

On August 10, 2011, more than 460 movie theaters nationwide broadcast a live band performance, video screening and a Q&A session with Angels & Airwaves Presents LOVE Live. At the same time, “Epic Holiday,” the final preview video for their science fiction movie Love, about a stranded astronaut, was streaming on their website. The video is the fourth and final extended story of characters that make brief appearances in the feature film.

Their fourth studio full-length Love Part 2 finally arrived November 11, 2011 (postponed from Valentines Day), available on its own or in a variety of packages, including both part one and part two. A deluxe version includes the 85-minute Love movie on DVD, while another package upgrades the deluxe version with a 128-page comic book based on the movie or adds a limited-edition t-shirt. Another package, limited to 25 sets, contains a signed, customized TD Epiphone guitar similar to the one Tom DeLonge plays.

As of late 2011, their newest member is local drummer is Ilan Rubin (Nine Inch Nails).

In early 2012, a new video was released for “Surrender,” from their Love Part 2 full-length, directed by William Eubank and featuring cameos by Evan Glodell and the Medusa car from the movie Bellflower. Set amongst opposing scenes of passionate youth rioting and dancing in the streets, the video, as lead singer Tom DeLonge explains it, is based on young revolution.

Near the end of 2012, SRC Vinyl released a 4-LP limited edition vinyl set with their full-lengths Love Part I (2010) and Love Part II (2011), with both albums as double LPs in their own gatefolds, housed in a color 4/4 CMYK O Card.

Tom DeLonge describes their early 2013 double-EP Stomping the Phantom Brake Pedal as “An experimental piece with odds and ends left over by the Love era, including some cool remix stuff.” A video for “Surrender Remix” features DeLonge in a space station.

Near the end of 2013, DeLonge released a children's book, The Lonely Astronaut On Christmas Eve, described as “a tale of a rocketeer alone on the moon on a cold Christmas night, and the gift he receives from a few unexpected -- and extraterrestrial -- friends.” Art from the book was auctioned to benefit San Diego's Rady Children's Hospital.

A limited-edition Lonely Astronaut Christmas Package was made available for $50 to the first 1000 customers, containing a hardcover first edition of the book, including a certificate of authenticity signed by DeLonge, a digital version of the book for iPad, Nook or Kindle, a Lonely Astronaut clear acrylic etched ornament, and a limited-edition t-shirt.

A new single was released in December 2014, "Tunnels," previewing their fifth studio album the Dream Walker, a multi-year project launching with the album and a short anime film, followed by graphic novels, a novel, then a feature film, various collectibles, and attire. "It's gonna be a long process, but there will be stuff rolling out continuously," DeLonge told Radio.com.

His first solo album was released April 21, 2015. To the Stars... Demos, Odds and Ends contains music from his "personal stash," including "demos, odds and ends." Numerous bundles including CDs, vinyl, and t-shirts are available on his website.

Also that Spring, DeLonge announced Sekret Machines, a transmedia series about UFOs to feature new music from Angels & Airwaves, non-fiction books, a documentary, and a hardcover novel, Sekret Machines Book 1: Chasing Shadows, the first in a trilogy cowritten by DeLonge and A.J. Hartley.

In August 2017, while working on the Strange Times film soundtrack, the band released their We Don't Need to Whisper – Acoustic EP, reworking four songs from their 2006 debut album: "Valkyrie Missile," "Distraction," "Do It For Me Now" and "The Adventure."

Spring 2019 saw their first new song in three years, "Rebel Girl," and an announcement of their first live dates in seven years, including a two-night stand at downtown's House of Blues on October 5 and 6. "Rebel Girl is a space-age love song that combines my enduring obsession for New Wave, pop punk and anthemic rock and roll music," said DeLonge in a press release. "As some of you might've heard, I recently took a brief minute to start up an aerospace company, so you never know: I may play this song from a satellite deep in space, beamed toward everyone's house viciously on repeat." Another single was released for "Kiss & Tell," with a video for the tune debuting in late November, 2019.

The announcement included notice that the band's music would no longer be released through DeLonge's To the Stars Academy of Arts & Science, and would instead be released by their new label Rise Records, home of Mayday Parade and ISSUES.