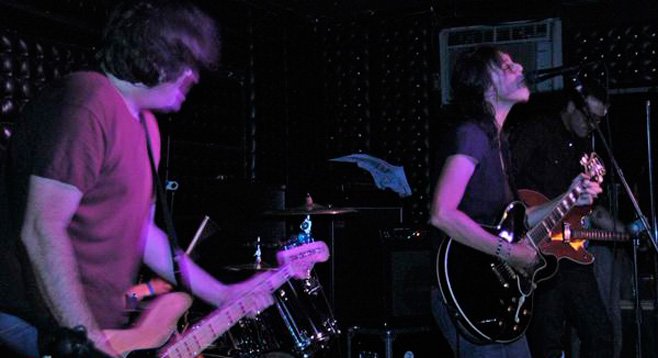 Influences: The Pixies, Nada Surf, Carpenters, the Softlites, Big Star, Foghat, the Who, the Kinks, Cocteau Twins, the Beach Boys, the Sex Pistols

Fronted by Lisah Nicholson (formerly of Red Dye No. 5), A.M. Vibe's sound has been described as combining the post-punk aggression of Nirvana and the fuzz of Stooges with melodies like those of the Carpenters and the Pixies. Using a sometimes noisy, sometimes nice approach, they deliver simple, irresistible, and intelligent songs.

The female-fronted band finished 2001 with a nomination for "Best Alternative Band" at the San Diego Music Awards, and brought in the New Year by completing a self-produced full-length record with engineer Ben Moore (Ravi Shankar, Rocket from the Crypt). 2002 brought the band another "Best Alternative Band" nomination and the release of their self-titled debut in Japan on Tone Vendor/Inpartmaint. In 2003, A.M. Vibe won "Best Local Recording" at the San Diego Music Awards.

With the domestic release of the album in 2003 on Silver Girl Records, A.M. Vibe turned their efforts back to their live show. They would soon make a name for themselves performing at Super Bowl XXXVII and supporting such national acts as Zwan, Juliana Hatfield, Cat Power, the New Pornographers, ImaRobot, and the Buzzcocks.

A.M. Vibe's single "Strawberry Pie" was featured in Touchstone Films' A Lot Like Love starring Amanda Peet and Ashton Kutcher, and their music has also been heard on the TV show Cold Case.

On Valentine's Day 2007, lead singer Lisah got her throat slit.

“It was the end result of a horse accident,” she says. “My C4 and C5 discs were touching each other, and I had spinal stenosis, which means my spinal cord was being smashed. You couldn’t even see the protective canal around my spinal cord.” Doctors told her that the wrong movement could cause crippling damage.

“The only option was spinal fusion surgery, unless I wanted to live a sedentary life. But I was very concerned about my vocals. My surgeon told me they’d be cutting through or very close to a nerve that affects my vocal cords and voice box. He couldn’t guarantee that my voice would go back to normal.” While awaiting her operation, she says she “…lost all the strength in my arms and hands, and trying to play guitar was brutal. I had to sit down to play, and eventually I had to stop playing at all.”

On February 14, “They [doctors] went in through my neck to my spine. Afterwards, I found out that they discovered a piece of my crushed disc lodged in my spinal cord, which could have paralyzed me for life just from turning around or bending over.”

A year later, she says, “No harm was done to my vocals! Sometimes my shoulders and neck get tired.… I have a titanium plate in my neck, and sometimes I can feel it in there behind my esophagus — especially when I laugh really hard, then I can totally feel it.”