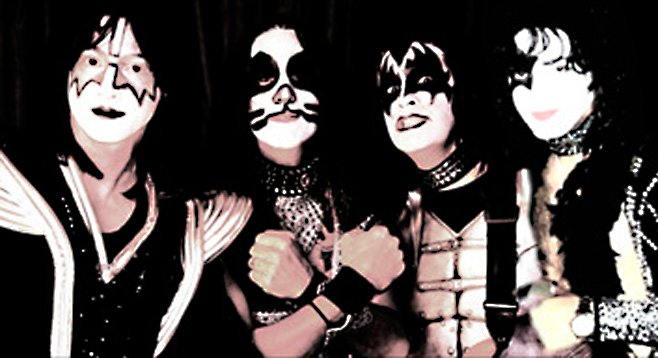 Kiss tribute band Alive! is Alive! is half San Diegan. “Two of us are locals,” Jon Douglas says. “One guy lives in L.A., and one band member flies in from North Carolina two or three times a month.” That would be Paul Stanley, as played by Alec Paul.

Rocco Fonzarelli (from L.A.) plays the part of Gene Simmons. “It’s really difficult to put together a good Kiss project.” Douglas and drummer Jason Lee Beckwith spent around a year getting Alive! off the ground.

“It’s hard to find people willing to put the time into learning both the music and the choreography.” With the overstated Kiss show downsized to fit into the domain of dance halls and nightclubs, Alive! travels with fake blood, smoke, fancy lights, go-go dancers, and a custom 4’ x 8’ KISS sign that glows in the dark.

All that makes Alive! an expensive gig. Douglas thinks they may have shelled out $18,000 on props and gear so far. “The costumes alone can cost up to $1,000 dollars each.”

Then again, to be successful in the tribute business means that one must be exacting or go home. Douglas’ Ace Frehley signature Les Paul, for example, spits smoke and has eerie halogen lights, just like the Gibson that Frehley played at the Budokan Theater in Tokyo in 1977.

“We focus on the two live records from the ‘70s,’ says Douglas. “Classic Kiss.” For the most part he says their marketing strategy is to shy away from the local bar scene.

“We’d love to get into bigger shows. A casino gig in Vegas, and the House of Blues. It’s on my list of to-dos.” Douglas has also gigged with a Duran Duran-style pop band. “But this is the most fun,” he says of Alive! “I was a Kiss fan growing up.”

In their Destroyer-era costumes Alive! members stand seven feet tall. “We do our makeup prior to a gig.” Douglas says that alone can take anywhere from forty minutes to two hours, depending.

“We walked into a 7-Eleven once all dressed up for a show to get food,” he says. “They gave us a second look, and that was all. I don’t know.” He laughs. “Maybe they thought we were going to rob them.”