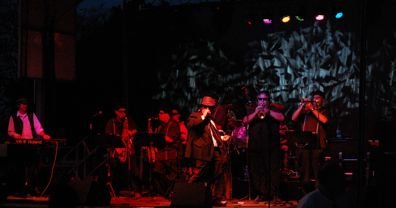 Sometime in 2004 three Horn players found themselves between gigs sitting in the studio arranging horn parts, and thought instead of joining another band, they decided to put together their own cover band that would be a combination of blues, R&B, and a touch of soul for sound. ACME Rhythm & Blues Revue was born. Musicians were brought in from various local bands who were looking to create a project that was fun and capitalized on their blues backgrounds and talents. With the members in place, the band committed themselves to a substantial amount of rehearsal time to further arrange and fine-tune their sound and show.

Trumpet and coronet player Jeffrey Marxen was killed in a February 23 traffic accident. He also played with Soul Purpose, a house band at Sharp Grossmont Hospital.