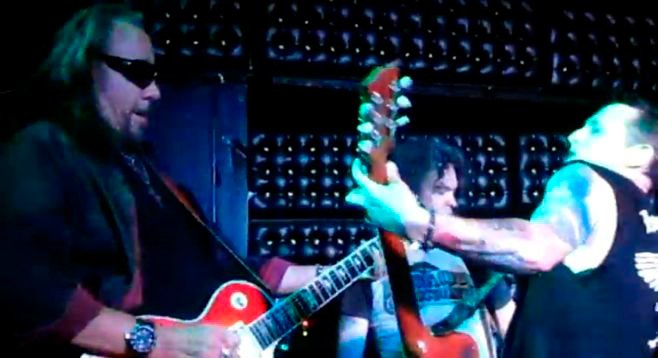 When Mike McCready (Pearl Jam) hit the Casbah on May 15, 2012, with his UFO tribute band, Flight To Mars, which includes Seattle mates Tim DiJulio (guitar), Gary Westlake (bass), Mike Musburger (drums) and Paul Passereli (vocals), the crowd got a special treat when original Kiss guitarist Ace Frehley showed up, to jam on Kiss' "Black Diamond." It turns out Frehley had moved in 2009 to San Diego, where he lived in a condo near Balboa park with local singer Rachael Gordon, who turned up on his next solo album.

His 2015 album Space Invader entered the Billboard 200 at number nine with opening-week sales of 19,000. He supported by touring Australia and New Zealand in 2015, beginning April 24 (his first-ever New Zealand solo shows), with a band that includes guitarist Richie Scarlett, bassist Chris Wyse, and drummer Scot Coogan.

A two-week summer 2015 tour of Europe included headline dates and outdoor shows like the Sweden Rock Festival. On his return, he made a surprise appearance at the Casbah's August 2 memorial concert for the Dragons' late bassist Steve Rodriguez (1967-2015), playing with the surviving Dragons (Mario Escovedo, Ken Horne, Jarrod Lucas).

At the end of 2015, Frehley was recruiting locals like Ray Brandes to help with an upcoming album, Origins Vol. 1, covering tunes by the Kinks, the Animals, the Rolling Stones, and more. Guest players included Paul Stanley, Slash, Mike McCready of Pearl Jam, Lita Ford, and John 5 from Marilyn Manson's band. The following year, he and Gordon moved to Rancho Santa Fe.

In summer 2019, he announced that the sequel to his 2016 collection of covers, Origins Vol. 2, will include songs by Jimi Hendrix, Cream, Led Zeppelin, the Animals, and Paul Revere & the Raiders, with Cheap Trick's Robin Zander guesting on Humble Pie's "30 Days In The Hole" and Lita Ford singing "Jumpin' Jack Flash" by the Rolling Stones. Fellow former Kiss guitarist Bruce Kulick performed on a cover of the Jimi Hendrix classic "Manic Depression" and John 5 played on covers of Cream ("Politician") and the Beatles ("I'm Down").