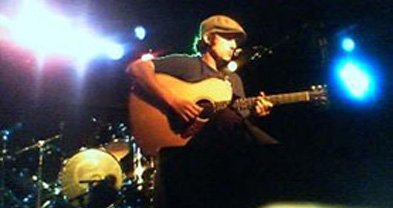 Aaron Bowen took up the violin in the first grade, but the guitar became his instrument of choice. After graduating Sweetwater High School, he earned a bachelor’s in music from SDSU.

In 1999, he suffered a work-related injury, severing tendons in his right hand. After several surgeries and a lot of physical therapy, he regained 40 percent movement in his right thumb. Aaron had to relearn the guitar and come up with his own technique and hung up the electric for the acoustic.

A noted player in underground guitar circles, Bowen has toured with Crimson Glory and formed the band Red Square Black. His father Richard Bowen played with the famed Mother Goose band of the 1960s.

Bowen was a maintenance man for a San Diego apartment complex and entered a unit for a repair while the tenant was gone and saw empty KFC buckets and some memorable guitars — quickly realizing who the tenant was, just as Buckethead and DJ Disk came home. As it turned out, Aaron attended GIT at Musicians Institute with Brian Carroll, aka Buckethead.

In 2010, he and his wife Kate launched a coffeehouse music series called Macaroni Club. “We didn’t have a coffeehouse community. I started getting angrier about it. Then, in 2008, while touring, I saw amazing scenes in Oregon, San Francisco, and Brooklyn, where artists support each other. That’s not what I’d been seeing here. Instead of whining, which I’d been doing a lot, I decided to do something.”

“I thought about what worked in those scenes and what wasn’t working here. I’d shared bills with people. When they weren’t onstage, they’d pull their audience outside to chat. Like, there’s only one ladder we’re all trying to climb. Well, guess what? The scene doesn’t go anywhere.”

The Macaroni Club name is based on his album The Supreme Macaroni Co. Ltd. “I hate macaroni. The Macaroni Club was a group in the 1700s — flamboyant guys who entered parties and caused a ruckus. They were political in the community — rabble-rousers. ‘Yankee Doodle...put a feather in his cap and called it macaroni’ — that’s where that came from.

“Our first event was in May, 2010, at Lestat’s. Then the opportunity opened up at Monica’s. It’s a great room for it. It’s about arts-and-crafts, too — we have painters, photographers, soap-makers, jewelry-makers, knitters...”