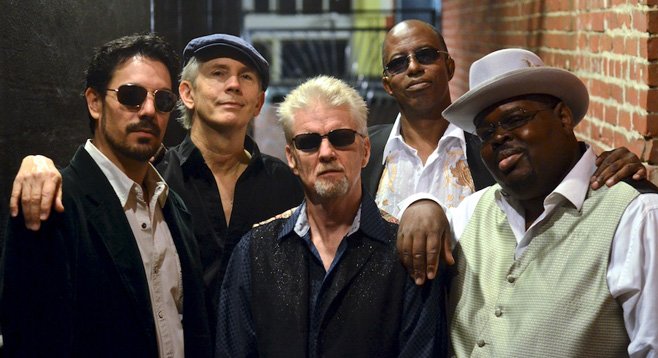 145th Street is a five-piece blues band that plays pubs, clubs, casinos, and festivals around San Diego. The group was founded in 2002 by singer/harpist Steve Bulger, aka Stevie B, and Marco Marrewa on guitar as the Bossmen.

“We added bass and drums, and all of the sudden, we had a band,” says Bulger. The winning lineup includes Mike Bullard on bass and a sax player from New Orleans by way of Southeast San Diego named Walter Gentry. The sax man’s dad owned a barbershop in Southeast. When he died, Walter came home and worked the shop for a while. (“He doesn’t cut hair anymore,” says Bulger.)

While Gentry was playing New Orleans gigs, he met Tony Peterson, a drummer who would also come to San Diego and eventually join 145th Street.

The group has opened for acts such as B.B. King, Bobby "Blue" Bland, Charlie Musselwhite, Tommy Castro, and others. They’ve had a residency at Patrick’s II in the Gaslamp for years and Bulger says they’ve played Humphrey’s Backstage, the House of Blues, 4th&B, “and all the local festivals.”

But 145th Street has otherwise been off the local radar. Why? “That’s a good question.” Bulger puts the blame on lack of self-promotion. “When people hear us, they say, ‘Holy shit, are you guys from around here?’”

Bulger, who lives in Serra Mesa and is a distant relative of ex-mobster Whitey Bulger, explains the band’s name: one-four-five describes the chord changes in the 12-bar blues. “We added ‘Street’ because that’s where everything happens.” They carry an old-school wallop redolent of the 1960s, when rock bands were romancing traditional blues. “We don’t play the usual blues covers.”

In late 2011, the band won a series of elimination rounds to end up as Blues Lovers United of San Diego’s (BLUSD) designated hometown choice for the International Blues Challenge in Memphis at the end of January, 2012. The International Blues Challenge is the world’s largest battle of the blues bands. It takes place over five days. More than 748 musicians from 13 countries compete. Oceanside’s Nathan James & Ben Hernandez won the solo/duo title in 2007.