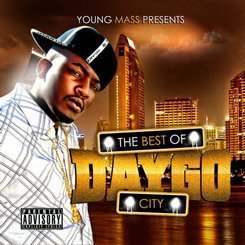 San Diego isn't immediately known as a hip-hop epicenter, but truth be told the city is bubbling over with intense talent, both mainstream and serious underground. When San Diego-based Young Mass looked around his town to see who was doing what, he quickly realized it was time to start putting Daygo City on the map.

This album bubbles over with San Diego pride, including tracks from tons of local artists like Kitty, Mr. Ridley (Anti Citizens), Black Cotton, Jimmy Powers (Clay Pigeons), Kayo, The Cor (Crhymes), Shavone C, Outta Control, Vision, and of course Young Mass himself. Take a trip around the San Diego scene with this album, and you'll catch diverse hip-hop flavors as unique as the city itself.

The album was nominated for a 2009 San Diego Music Award.

WHERE CAN I GET THIS ALBUM???? AccessHipHop.com & iTunes

MORE ALBUM INFO???? Check out the blog at www.myspace.com/massterpiece *There are album updates, reviews and links to ALL the albums participating acts!!!