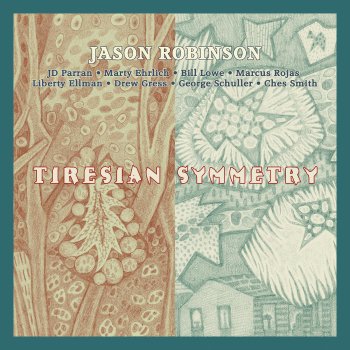 Tenor saxophonist/composer Jason Robinson represents the best hopes one could have in the generation of players entering their maturity in this age where cookie-cutout, music-factory sameness seems to dominate the plethora of jazz releases.

Robinson is a schooled musician who never lets the an academic background inhibit his wild extrapolations of Archie Shepp, Roscoe Mitchell and other firebrands of the fertile free-jazz landscape of the 1960's.

Recorded in a scant two days at Brooklyn's Systems Two studios by engineer Mike Marciano, the album is pure sonic pleasure. The nine-piece ensemble never bogs down or becomes bottom-heavy, and each instrument is audible in all of its potential glory.

Although Henry Threadgill's Very, Very Circus is an obvious point of reference, only two of the pieces bear an obvious connection, the opening "Stratum 3", with its nervous tuba and drum exchanges (with an excellent solo from Rojas), and the bookend-ish "Saros," with it's depth charge swirls from Parran and Ehrlich, on bass clarinet and contrabass clarinet and wild features from Rojas and Ellman, who takes a dark turn over liquid chords into a howling caterwaul of distorted electronics. Gress also solos at length, making his bass sound about 10 feet tall in the process.

The tour-de-force, however is in the nearly four minute solo saxophone improvisation from Robinson, who twists and turns a throaty rasp and slap-tongues and screams his way into the altissimo register in one of the most exciting solos in recent history.

Throughout this album, the writing for horns could not be more inventive and sublime. There are traces of Mingus and Oliver Nelson in the way Robinson voices his horn choir --and he is extremely generous with the space he allocates all of the solo talent he has at hand.

"Corduroy" yields another great Ellman spot, and a hilarious trombone-under-water solo from Bill Lowe, who uses the plunger-mute to evoke a sound not-unlike Charlie Brown's teacher on a serious bender.