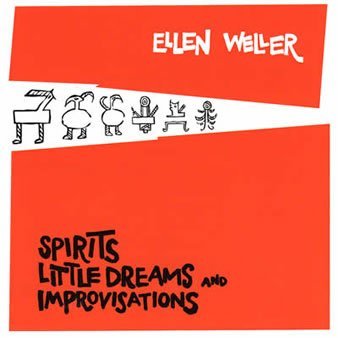 A few years back, a friend of mine asked me to compile a "desert-island" list of 10 or so CDs I found absolutely essential. After thinking on the subject for many hours, I was able to assemble a compendium of 135, discs that were, in my view, "must-haves."

I couldn't imagine parting with any of them. Even still, within that list there are 10 or so that comprise the best-of-the-best. Discs like John Coltrane's Crescent, Keith Jarrett's Survivors Suite, and Kenny Wheeler's Gnu High. A later entry would be Bert Turetzky's trio disc with Vinny Golia and George Lewis-- Triangulation II, a collection of free improvisations.

So when I met multi-instrumentalist Ellen Weller for coffee three months ago, I had no idea she was about to hand me a recording that would stand me on my head, and force itself into that hallowed territory.

I have listened to Weller's Spirits, Little Dreams & Improvisations, literally, hundreds of times since, and it still never fails to amaze me.

Released in 2004, on the small Circumvention Music label with little fanfare, Spirits is, nonetheless a monumental achievement by any stretch of the imagination.

Usually, when Ellen's name appears in print, it's used in the context of her super musical family, which consists of husband Bob, a triple-threat pianist, drummer and composer--and uber talented sons Danny, an up-and-coming bassist and Charlie, a drummer who just graduated from the venerable Berklee College of Music in Boston.

Ellen's versatility as a musician knows no bounds. She teaches ethnomusicology at Palomar College, where she also conducts the Symphony Orchestra. However, not much is made about her standing as one of the best free-improvising woodwind players on the planet.

Bob and Charlie make several sublime contributions to Spirits, as do percussionists Marcos Fernandez of the Trummerflora Collective and Nathan Hubbard of the free jazz co-op Cosmologic. There are three bassists on the disc, Bert Turetzky, Scott Walton, and Lisle Ellis. Of the three, Ellis gets the majority of playing time.

Rounding out the effort are free jazz giants George Lewis on trombone, and Vinny Golia on sopranino and tenor saxophones and contrabass clarinet. Both Lewis and Golia turn in some of their finest work in years on this disc, a fitting tribute to the esteem in which they hold the leader. Clarinetist Robert Zelickman appears just once, with Weller and Turetzky, on "The Rebbe's Premonition," a dark and twisted adventure spurred on by Turetzky's behemoth arco drone.

Weller performs three duets in all: two with Lewis and one with Turetzky. The pieces with Lewis are raw adventures in contrast. While Lewis huffs sub-tone gurgles and blatting forays into his upper register, Weller trills and essays lines that represent an additional dimension.

The duet with Turetzky, "Inner Struggle" is a startling tour-de-force. The two begin with serpentine lines in the upper register, initially making it difficult to distinguish who is playing what. Then Turetzky gets a low grainy arco happening that sounds positively wicked thanks to the insertion of paper in between his strings while he saws forcefully with the bow. All the while, Weller orbits around his lines with tonally manipulated soprano sounds, and occasionally the two intuit dramatic unison rhythms, which is almost unbelievable, considering the lack of pre-written material and the fact that the two musicians were in separate rooms at the time.

Also quite impressive is the remarkable funk piece, "Unfinished Business," with Lisle Ellis on solid-body upright, husband Bob on piano, son Charlie on drums, Fernandez on percussion, and Lewis on trombone. Apparently, this tune was counted off as a soundcheck, with nothing more than a tempo. "Unfinished Business" is a masterwork of free-funk propelled by growling bass lines and the melodic give and take between Lewis' bone and Weller's soprano.

"Grandma Rose's Dreml" refers to a "little dream" not the popular handheld motorized tool. It is a cinematic journey that begins with very otherworldly field recordings of Fernandez, dark bowing by Ellis, while Weller coos and hisses and generally distorts the notions of conventional flute playing beyond recognition. Bob Weller elicits pointed and sparkling single note flourishes from his piano, all very reverent, and it sounds like the archetypal ECM music developing.

Suddenly, Lewis' trombone whips a declarative descending melody out of the ether, and it's off to a galloping funk race powered by Charlie Weller's amazing "arena-rock" drumming, which turns the beat around in a fashion that makes me think of Ronald Shannon Jackson every time I hear it. Charlie was all of 17 when he cut this track! There's a brief duet between mother and son where her soprano wraps around his drums like a "beautiful nightmare," to paraphrase Roy Haynes.

It's hard to believe that this is Weller's debut album as a leader. She has surrounded herself with ringers, and they all turn in bravura performances that seem directly inspired by her adventurous aesthetic. Ellen can take it out with the best of them, but her improvisations are always extremely melodic.

Out of a cast of heavyweights, Vinny Golia is often the secret weapon. His monstrous contrabass clarinet assumes the role of the dybbuk (the corrupting force), in two cuts, and his incredible manipulations of the instrument with ghostly harmonics and split-toned multi-phonics are worth the price of the CD by themselves.

After Weller returns to the simplicity of flute and drums, (the surprising groove centered collaborations of Fernandez and Hubbard on congas and various hand-drums), the scene changes dramatically again with the emergence of Bob Weller's Cecil Taylor-esque piano, the dual basses of Ellis and Scott Walton and an astonishing tenor sax solo by Golia, who races serpentine lines up the horn that punctuate into screaming exclamations. At 12 minutes, "Celebration, Transfiguration and Release into the Ether," is yet another tour-de-force on a disc full of them.

In fact, there is not a weak cut on this album, even though there are 17 of them. It compares well to classic stuff by Anthony Braxton and theArt Ensemble of Chicago, as well as Cecil Taylor's epochal release Conquistador.